Scientists to Football Players: Give Us Your Brains

Amidst a growing body of evidence tying severe health problems to multiple concussions, researchers are tapping NFL stars for a more hands-on corroboration 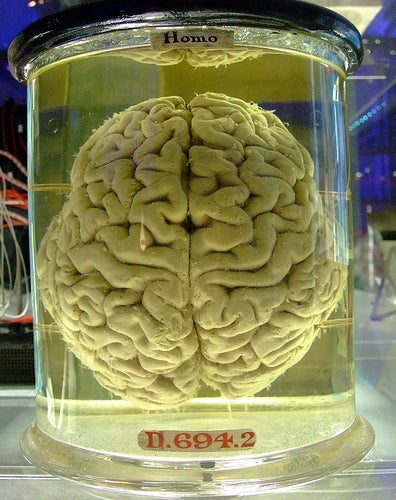 Whenever rich people gather, charities flock hoping to solicit donations of time and money. But Chris Nowinski is asking NFL players at the Super Bowl this weekend for something a bit more personal. He wants them to donate their brains to science. And he’s getting what he wants.

Nowinski is the founder of the Sports Legacy Institute (SLI), which along with the Boston University School of Medicine is conducting autopsies on former athletes to research the effect of concussive impacts. To date eight former NFL players have promised to donate their brains to science after their death. Nowinski is a former professional wrestler who understands firsthand the potential ramifications of head impacts.

At the heart of the SLI research is the detection of what’s termed Chronic Traumatic Encephalopathy. During autopsies a series of stains reveal red spots that confirm the presence of abnormal proteins in each player’s brain. Some hypothesize that those abnormalities are the result of concussive, and sub-concussive impacts, and the cause of serious health problems in former NFL players. From cases of dementia, to depression to suicide the recent trends have been covered at length in peer reviewed journals and the pages of Popular Science.

Just this week, SLI announced the sixth confirmed case of CTE in a former NFL player, Tom McHale, who died at just 45 from a drug overdose last year. Official members of the NFL’s committed on traumatic brain injury are requesting patience until the data is published in official journals but the public campaign by SLI is overwhelming accepted scientific protocol.

The disagreement is the latest pitting of the NFL’s committee against nearly every piece of outside research regarding concussions (incidence rate, recurrence rate, return to play guidelines, link to depression, Alzheimer’s, and dementia). Undetectable by medical imaging, the very diagnosis of a concussion is subjective and based on side effects (feeling dinged, headaches, wooziness, etc.). There’s minimal consensus on what they are, how often they occur, how to treat them and, of course, what the long-term effects are. With each pledge Nowinski can secure, that consensus might get a bit closer.