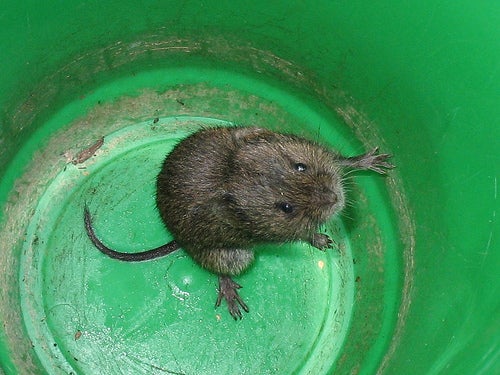 The cute and cuddly prairie vole, one of only a few mammals that remain monogamous for most of their lives, has long been a favorite “lab rat” for scientists studying love and attachment. Now researchers at Emory University and the University of Regensburg have found that prairie voles actually show signs of grieving—the opposite of attachment—when they’re taken away from their romantic partners.

After pairing nine male voles with females and letting them bond for five days (an eternity for these short-lived rodents), researchers wrested the fledgling couples apart. Compared to voles who had not been separated—and to a control group of males who had been bonded to other males in “friendship,” then separated—the voles who had been taken away from their “romantic” partners showed signs of suffering. The level of stress hormones in their blood rose sharply, they grew passive and sluggish, and their performance on “forced swim and tail suspension tests”—which are just about as dauntingly unfun for the voles as they sound—decreased quite a bit from pre-separation levels. In short, they were depressed: bonding with an opposite-sex partner had measurably changed the neurochemistry of the voles’ brains. The researchers found that they could reverse this effect by administering a drug that blocked a chemical called corticotropin-releasing factor (CRF), which regulates the body’s stress responses. This suggests that CRF plays a part in generating the array of emotional and physical sensations that we call grief.

The same phenomenon might be at work in human romantic pairs, which could explain why we get so violently unhappy when a partner is taken away from us by death, divorce, or circumstance, or even why we remain in abusive or unhealthy relationships. It’s even possible that, at some point in the future, doctors could prescribe a CRF-blocker to sad Heloises and Abelards to assuage symptoms of acute partner loss.

Got a burning question about the science of sex? Hoping to see a particular topic covered here? Submit your tips, requests, and queries to popsci.sexfiles@gmail.com. I’ll answer some selected reader questions in an upcoming column. Keep track of The Sex Files at popsci.com/sexfiles, where you can also sign up for an rss feed.