Set Your Tongue On Fire 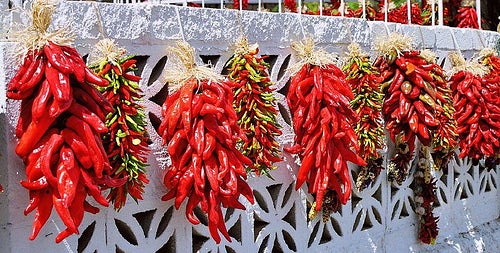 We all know that eating hot peppers can burn your tongue and make you sweat, but up till now researchers thought the process was a result of chemicals stimulating neurons rather than the actually production of heat. But Yasser Ahmed Mahmmoud at Denmark’s University of Aarhus has discovered something surprising—chili peppers can actually turn up the temperature, a finding that may have significant uses in the future

It turns out, the spicy component in peppers, capsaicin (CPS), affects a muscle protein called SERCA. Normally, SERCA burns ATP, a type of molecular fuel, to “pump” calcium ions across a membrane to help our muscles relax after they have contracted. But the addition of capsaicin shuts down the calcium pump, causing the ATP burned by SERCA to be released as heat, a process known as thermogenesis. Multiply this by a factor of several thousand, and you’re producing a noticeable amount of warmth.

The finding helps explain why capsaicin and chili peppers have been associated with increased metabolism and body temperature regulation in the past—by increasing a person’s core temperature, the capsaicin in peppers sends the body’s cooling mechanisms into overdrive. This is the first time that researchers have found a compound outside the body that aids in thermogenesis, and some believe the findings may eventually lead to better treatments for hypothermia. Until then, though, the next time you feel a chill, you might want to reach for a spoonful of Bayou Butt Burner hot sauce instead of that blanket.