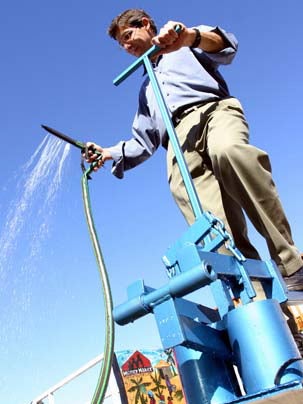 The Super MoneyMaker Pump–yes, that’s the real name–sucks up water from sources as many as 30 feet below the ground, can spray it up to 40 feet high, and can even push it through 1,000 feet of hose to cover a larger section of land. In all, the pump can irrigate two acres of land, and costs only around $100.

MIT professor Martin Fisher and his team at KickStart, a nonprofit, invented the pump for small-scale farmers. Since it’s human-powered and easy to use, it allows them to irrigate crops all year round, instead of just waiting for the rainy season.

And no, it’s not really about money-making in the American sense. It’s designed to help farmers start small businesses. At this point, the pump’s users are generating an average of $1,000 extra profit each year. A smaller, less expensive version is helping farmers clear $650 extra per year. The work is a reminder that great new technology doesn’t always have a chip at its core.