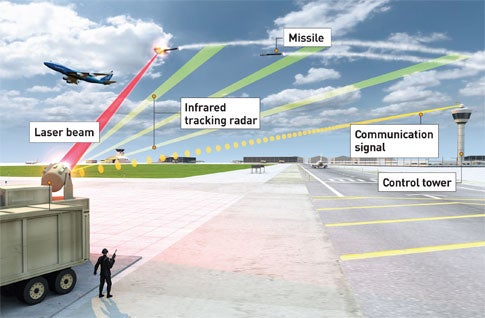 Sounds too futuristic to be true? See below for a video of the Skyguard system taking out mortar rounds, artillery shells and rockets

This summer´s war between Lebanon and Israel was the most recent demonstration of the deadly threat posed by shoulder-fired missiles. Lebanese Hezbollah fighters armed with portable rocket launchers fired more than 3,700 missiles into Israeli cities during the 34-day conflict. With a growing number of such weapons, referred to in military-speak as MANPADS (Man-Portable Air Defense Systems) showing up on the black market, U.S. officials are becoming increasingly concerned about their risk to commercial aircraft. That´s why the Department of Homeland Security is nearly doubling its spending on countermeasure research to $110
million this year.

One particularly notable technology under consideration is a laser called Skyguard that can make mincemeat out of a missile in a matter of seconds, according to its developer, defense contractor Northrop Grumman, which adapted the laser from a larger militarized version. Packed inside a unit the size of three school buses and stationed close to the runways, Skyguard is essentially a giant laser gun with brains. It focuses a powerful energy beam with pinpoint accuracy on a missile, heating up the explosives inside to make them detonate before reaching their target.

Of course, such Star Warsâ€grade protection carries a hefty price tag. Each unit costs about $150 million, although large-scale production could bring the price down to as low as $30 million. Northrop says its system could be deployed at major U.S. airports by 2008.

Can’t see this? Download Flash, or get the video in Quicktime format here.