A mega-drill will go where no machine has gone before: into Earth's mantle 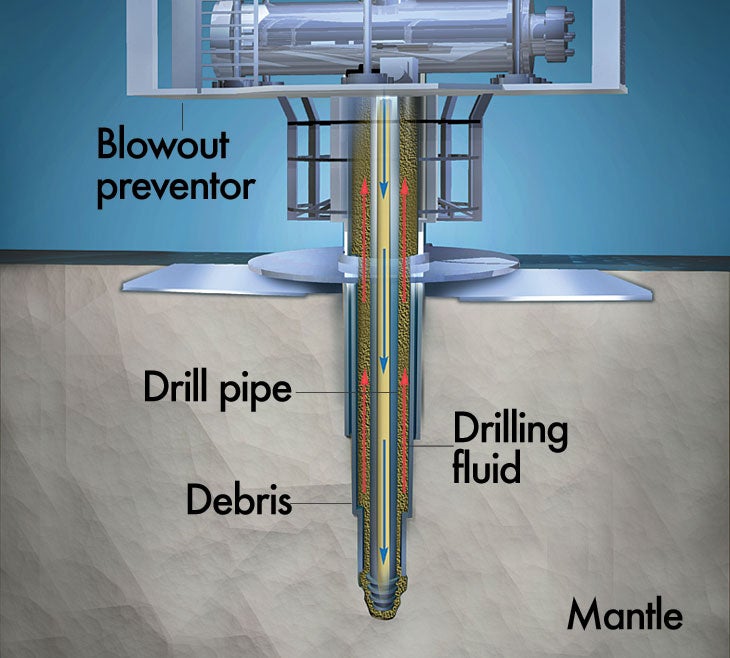 Traveling to the center of the Earth is a fanciful concept, but consider the reality: We have so far drilled just 7.5 miles into the Earth’s rocky crust, leaving roughly 3,962 more miles to go. The new Japanese research vessel Chikyu won’t exactly breach Earth’s core, but it will drill to an unprecedented depth, beginning in late 2007 when it embarks on its first scientific mission off the southwestern coast of Japan.

The 57,500-ton rig is equipped with a 5.9-mile-long drill designed to blast four miles into Earth’s crust and strike the semi-molten mantle that lies beneath it. There, scientists hope to dig up primordial creatures-such as hydrogen-
feeding microbes that may be thriving under the same conditions as those of the early Earth-and possibly reveal new clues to the origin of life.
“It is the only place where you might find such ancient life-forms,” says Asahiko Taira, director of Japan’s Center for Deep Earth Exploration, which leads the 21-nation Integrated Ocean Drilling Program in charge of the $540-million ship.

Ordinary drills can’t reach the mantle through the ocean because their boreholes collapse beyond a depth of 1.3 miles, where pressure can exceed 7,000 pounds per square inch. To make walls pressure-proof, the Chikyu drill will pump high-density artificial mud into the borehole as it burrows into the Earth. If all goes well, scientists hope to strike the mantle by 2012.

HERE’S THE DRILL
Operators pump artificial mud-composed of clay minerals, viscous polymers and seawater-into the drill pipe. As the “mud” pours through the drill bit, it lubricates the nozzle and clears it of rock cuttings. Mud and the debris circulate back up the borehole, coating the borehole walls and helping them to resist collapse.