(Not Quite a) Rumble in the Theoretical Jungle

Book of the month: Kuhn vs. Popper: The Struggle for the Soul of Science 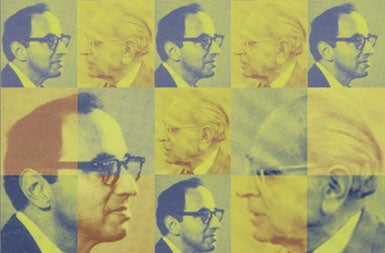 The philosopher Karl Popper is fast becoming the best-known loser in modern intellectual history. Three years ago, in the book Wittgenstein’s Poker, which recounts a famous battle between Popper and his contemporary, Ludwig Wittgenstein, authors David Edmonds and John Eidinow clearly gave the latter the upper hand. Now, in Kuhn vs. Popper: The Struggle for the Soul of Science (Columbia University Press, $24), Steve Fuller recounts Popper’s debate with the Harvard physicist turned historian
of science Thomas Kuhn. Although Fuller bills the showdown, which took place on July 13, 1965, at the University of London, as the intellectual equivalent of Ali-Frazier, he also admits that it was something of a nonevent. Kuhn didn’t like to debate, and Popper, an established thinker two decades his senior, didn’t want to share the stage with an upstart. There may have been no clear winner that day, but Kuhn’s ideas enjoyed more popularity in the long run. His book The Structure of Scientific Revolutions has since sold more than a million copies and been translated into 20 languages.

Popper described a kind of democratic model for science, one with perpetual elections in which incumbent theories are constantly under attack. He thought the best scientists were the Newtons and Einsteins, constantly trying to overthrow the established ideas. Fuller describes Kuhn’s model as more of a monarchy, each dominant paradigm a regime immune to criticism. “If an argument were to be had,” Fuller writes of Kuhn, “it would be over how to legitimate what scientists were already doing, not over whether they should be doing it.”

Fuller clearly sides with Popper–at one point he calls Kuhn “an intellectual coward”–and this opinionated take gives the story life. The book is a little academic in places, so a familiarity with philosophy of science would suit a reader well (for example, define a “post-leftist postmodernist”). That said, it’s a fascinating and, at 132 pages, delightfully concise work. In the end, Fuller urges the reader to study further. As he writes: “The soul of science depends on it.”