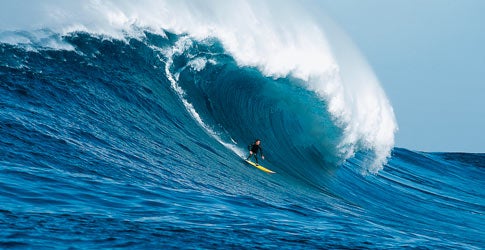 Credits: Harry Potter and the Prisoner of Azkaban, Step into Liquid, Blue Crush, Die Another Day

For the 2003 surf documentary Step into Liquid,
Director Dana Brown set out to record the best footage ever of big-wave surfing at Cortez Bank, 100 miles off the shore of California. The results were arresting: Witness the likes of Ken “Skindog” Collins ripping down the faces of 65-foot giants. Action-sports eye candy? Sure. But it was filmed with an elegance approaching that of poetry–no mean feat, considering that the camera boat was riding the same swells. Capturing steady shots required fistfuls of Dramamine and an innovative, Sci-Tech Awardâ€nominated camera mount known as Perfect Horizon.

Even in filmmaking’s digital age, many problems must still be solved mechanically, with gears, grease, bolts, cables, and years of an obscure inventor’s passion. Need to show racehorses charging into the camera? Use the Sci-Tech Oscar-winning Technocrane, which swivels, swoops, and extends 50 feet. Need a shot from a motorcycle at 150 mph? Try nominee Doggicam System’s Sparrow Head, an ultra-steady, wirelessly operated remote camera head.

Perfect Horizon is the brainchild of David Grober, a veteran marine-production coordinator for films and the founder of a
company called Motion Picture Marine. “Throughout the years, I
saw that it would have been really helpful to have a small, easily transportable camera-stabilization system,” he says. Some earlier devices employed gyros to counteract aquatic motion but also tended to fight intentional movements by the camera operator, and systems powered by hydraulics were heavy and messy. In 1999, after years of tinkering, Grober released his own invention.

His key breakthroughs: electronic sensors to detect motion and a computer to calculate the appropriate stabilizing reactions. The core of the unit is a gimbal that swivels nimbly from side to side and forward and backward so that no matter what happens below it, the camera platform remains level with the horizon. Finessing the twin electric motors that power the mount’s correctional movements was Grober’s biggest challenge. “If you have any sort of backlash, you’ll see it onscreen,” he says. Perfect Horizon has evolved substantially since its debut. The latest version is waterproof, housed in carbon fiber and aluminum, and lightweight (30 pounds, versus the 130 of the original). It can be perched atop a tripod with the camera mounted directly above, or be suspended beneath a crane; the camera is controlled as it would normally be, with full pan and tilt abilities.

Perfect Horizon’s sea legs have also proved effective on land. It has been deployed on cars (Seabiscuit) and golf carts (Spanglish)–as well as on boats (Die Another Day) and jet skis (the upcoming Hitch). Perhaps the most imaginative use was for a scene in Harry Potter and the Prisoner of Azkaban in which Harry takes a manic
journey on board a triple-decker bus. For shots of the interior havoc–sliding beds, a swinging chandelier–filmmakers built a full-scale model of the bus and positioned it on top of a swaying platform. Inside, the camera was placed on a Perfect Horizon mount. With the visual perspective level, audiences were able to grasp that the bus was
tipping back and forth. “That was the only way they could do that shot,” Grober says.