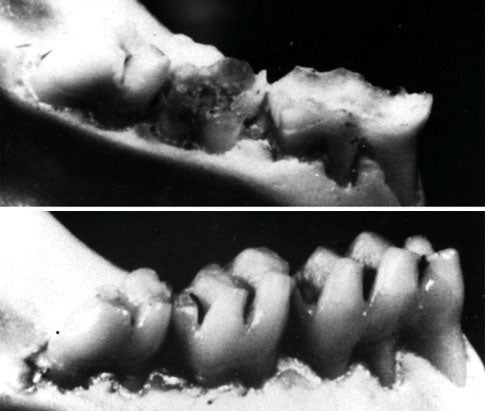 Three Out of Four Rats Agree

“If there was a market for preventing cavities in rats, I’d be a millionaire,” Hillman says. (Top) Rat teeth colonized with a strain of S. mutans, also native to human teeth. (Bottom) Rat teeth with Hillman’s nonlactic acid producing strain. The results are obvious: one rat needs major dental work.

Kids get cavities. Dentists fill them. It’s a fairly old arrangement, but it may soon come to an end if cavities go the way of smallpox. Jeffrey Hillman’s company, Oragenics, has patented a simple swab of bacteria that when wiped across a set of teeth will (allegedly) grant a lifetime of protection from tooth decay. By this fall, Hillman, a dental researcher at the University of Florida, will begin testing the new strain on 15 to 30 volunteers.

Normally, bacteria called Streptococcus mutans grow on human teeth and convert sugar into lactic acid, which rots enamel. Hillman engineered a strain of S. mutans that doesn’t produce lactic acid; instead, it carries an antibiotic that helps it displace the indigenous cavity-inducing strain. “The dentist will apply our bacteria and then tell the patient to go home and eat sugar,” Hillman says. As luck would have it, Tootsie Rolls, lollipops, et al. help to colonize the new strain, but instead of creating a cavity the sugar helps form a tooth security guard, thus revolutionizing the practice of modern dentistry. “I think that’s a fair way to put it,” says Kenneth Burrell, senior director of the American Dental Association Council on Scientific Affairs. But there could be a hitch with the FDA: Hillman is not sure whether patients can transfer the new strain to others with, say, just a kiss. Hillman is confident there will be no “horizontal transmission,” but just to be sure, the spouses of Phase I testers will be monitored. If the strain stays put, it could go commercial within five to six years.