Got a Stuka On My Hand

It's an ultrafast killing machine with bleeding-edge aerodynamics. Not a pet. 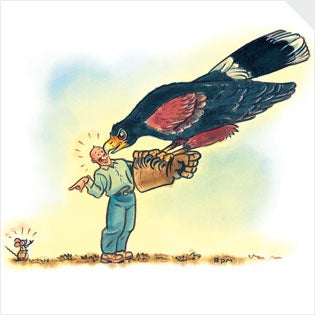 I built and for nine years flew an airplane called a Falco, which is Italian for hawk. But it wasn’t until May that I flew a real hawk-a cold-eyed, scimitar-beaked, red-brown Harris’s hawk that perched on my gloved left hand, flapped off into the Vermont air, dove at mice and voles like an F/A-18 with bin Laden in the crosshairs, and eventually returned softly to my hand. OK, it didn’t return to my hand, it returned to the small cube of raw beef placed between my thumb and forefinger.

Yes, this column is called Man & Machine, but hang on, a hunting hawk is nothing more than a killing machine with the aerodynamics of a Reno racer. It is also hard, fast, and shiny.

How fast? Well, how’s 242 mph, a peregrine falcon’s dive speed recorded in a recent edition of National Geographic Explorer? There is a piece of film shot in the 1940s, analyzed by the British Royal Navy, which concluded that a hawk was diving at 273 mph, but skepticism abounds. Still, I can’t think of a faster animal on the planet.

A diving hawk looks like a very angry top-gun Tomcat at full-aft wing sweep. The truly fast ones take only birds in midair, since they’d crater if they dove on a ground animal. The Harris’s with which I practiced was better adapted to surface targets. Like feathered Stukas, hawks have tiny tabs called alulas at about the midpoint of their wings that form little leading-edge slots with which they can vary the direction and speed of a dive. Hawks even have tiny bony protrusions in their nostrils that act a bit like the splitters inside a supersonic jet’s intake, to prevent the airflow in a dive from rupturing air sacs.

Hawks don’t sing, soar for fun, or socialize at birdfeeders. Their only vocalizations are a squawking “pick me, pick me” when you enter the mews where a bunch of hunting hawks are waiting to be taken out, and something that sounds like Yoda ruminating when they’re on your fist and sense meat somewhere nearby. In the wild, a small raptor needs to eat 20 to 25 percent of its body weight per day-the equivalent of a 200-pound running back putting away 40 to 50 pounds of Big Macs and fries. All that hawks think about is food. They spend about 90 percent of their life standing motionless on a perch, digesting what they’ve eaten or looking for more.

A hawk can see a mouse a quarter-mile away, if it moves; these raptors see about three times as far and as clearly as can a human. Their “flicker vision” (the number of discrete images they process per second) is said to be four times that of a person’s. Humans have about 200,000 cells per square millimeter in the image-acquiring parts of our eyes; hawks have a million or more. A hawk’s pair of eyes weighs more than its brain.

The key to using hawks for sport hunting is not that the birds kill-they do that for a living-but that you can retrieve them after they do so. It’s not that they form a bond with their handler, for you have as much chance of turning a hawk into a pet as you do of having a shark fetch your slippers. The trick is fuel management. No free-flight modeler would launch an airplane fat with gas, for that would let the thing fly so far he’d never get it back. Similarly, hawks are flown by falconers only when their “tanks” are a quarter full or perhaps even on reserve.

A falconer knows to a fraction of an ounce the empty weight, as a pilot would say, of his or her bird. If a Harris’s hawk is just an ounce or two heavier than that, it’s good to go: It’ll run out of gas before flying too far and will be forced to refuel-to return for the easy chunk of meat on your fist.

As a new falconer with a bird on the fist, the first surprise is that the vicious-looking beak a foot from your face isn’t a danger. A hawk’s main weapons are its talons, and it would no more think of biting than a pit bull would consider kicking you in the shins. The second surprise is the bird’s weight: It feels as heavy as you imagine a robin might, for its bones are quite hollow-a tube-frame fuselage, in effect.

When you “cast” the bird by stepping off with your right foot and urging it into flight with your left hand, it’s like launching a balsa-and-Mylar model. You want to be smooth, not wrist-snappingly harsh, and your heart flies with the bird just as it would with the model. To fly a hawk is to be a hawk.

Even better is when the hawk returns. A cowboy whistle usually brings it back, and the bird wastes not an erg of effort on its nicely stabilized descent. On final, it goes right down into ground effect, less than half a wingspan off the ground, and adjusts its outer feathers like outspread fingers: quintuple-slotted flaps and ailerons combined, in effect. Coming over the fence, again as a pilot would imagine it, the bird brakes delicately, feeds in some aft stick and flares, gear down and locked, bleeding off speed by climbing the 5 feet from ground level to fist.

The sport of falconry is 4,000 years old, and along with the occasional use by African nobles of cheetahs to chase down game, and the use of cormorants by Chinese fishermen, is a rare example of wild creatures being used by humans for hunting. Falconry equipment-leather jesses to hold the hawk’s legs, an intricately sewn hood to cover its eyes while traveling, a swung lure that mimics the hawk’s prey, the thick glove-is much the same as it was when Kublai Khan rode forth with a staff of falconers on horseback tending his 500 raptors.

Except for one thing: the tracking beacon. Today, valuable hawks aren’t flown until a tiny radio transmitter trailing a thin antenna wire is strapped to one leg, so the bird can be found if it gobbles up enough mouse meat to undergo a change of mind about the need to go home. What in the Middle Ages was the nobility’s equivalent of r/c model airplanes has today become, if not radio-controlled, at least radio-located.