Why Does Wine Go Bad Once You’ve Opened It?

Do those wine-saver gadgets actually work? 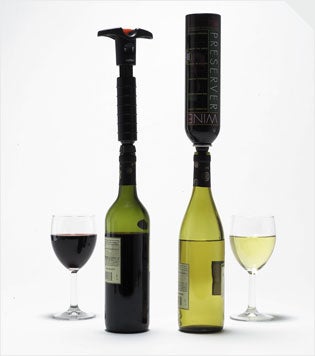 Why does wine go bad once you’ve opened it? Do those wine-saver gadgets actually work?

When a wine bottle is uncorked, its contents are exposed to air, causing them to oxidize. If you leave the open bottle out long enough, your once-tasty beverage could end up smelling like “sweaty socks or wet cardboard,” says Philip Morace, president of the Sommelier Society of America.

Bacteria naturally present in grapes can turn either the sugars in grape juice or the alcohol in wine into acetic acid, giving it a vinegar taste (and eventually producing a wine vinegar). However, these bacteria need oxygen to grow. Wine’s fermentation process is usually oxygen-free because of the large amount of carbon dioxide produced when yeasts turn sugars into alcohol. Uncorking the bottle introduces oxygen to feed the bacteria, and the flavor begins to change immediately. Not all changes are undesirable: Expensive red wines, in particular, are said to improve in the decanter and in the glass over a short period. Some white wines oxidize in the bottle over years, producing a rich rather than sour quality.

Still, oxygen is the enemy of most wine, and there are several devices on the market to put a halt to the process. One way is with a vacuum pump that pumps air out of the bottle. A nitrogen sealant is another preservation method. Releasing nitrogen into the bottle displaces oxygen, theoretically keeping it from tainting the flavor.

We tested a vacuum pump and a nitrogen sealant (priced from $10 to $20, from Zyliss and Cork Pops Inc., respectively) to see if these gadgets work. It was a controlled test, though not with a large enough sample of participants to be truly scientific. We were interested to see whether wine drinkers-a couple of wine lovers and several casual consumers-could tell the vacuum- and nitrogen-preserved wine from wine that had simply been recorked after opening. The test was conducted on a white German Riesling, opened and preserved for a week (and, for some tasters, two weeks), and an American pinot noir, preserved for three days. In both cases, a fresh bottle was opened for comparison when the preserved wine was tasted. The wines were tasted “blind:” no one knew what they were tasting until afterward.

Among the wine lovers, both were able to peg the fresh white wine, and one immediately identified the fresh red. They had a much harder time sorting through the preserved wines and the wine that had merely been recorked. The casual drinkers could not identify any of the wines consistently, nor agree on which was their favorite.

Although the sample was small, the results suggest that for mid-priced wines (over $10, under $20) the average wine buyer might be better off either polishing off the bottle when it’s opened or quickly recorking and refrigerating it for a few days.