Choo-choos and plant-based fuels are in our energy future. 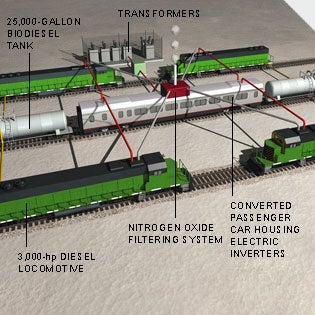 It was the end of civilization as we know it,” says Mike Hart, CEO of California’s Sierra Railroad, of the rolling blackouts that devastated California last year. But the crisis also gave Hart an idea. “I looked at one of our locomotives and thought: We could supply an entire town with power.”

The Sierra Railroad, a freight and tourism line in central California, has decided to retrofit 48 of its diesel-powered locomotives to generate power. Rather than being connected to a train’s wheel system, each locomotive’s diesel generator will be linked to an electric inverter, a standard device used to create electrical energy in equipment ranging from windmills to solar cells. Together, the 48 trains will produce 100 megawatts of electricity, enough for 100,000 homes. In a crisis, they could deliver power anywhere in the country.

But what made Hart’s good idea better was his decision to use biodiesel as the fuel. Biodiesel is made from agricultural sources such as soybeans, rapeseed, or even recycled cooking oil. Unlike other alternative fuels, it can power existing diesel engines with little or no modification. Biodiesel is currently used only by a few federal agencies, municipalities, and universities, because it’s more expensive than regular diesel. But the fuel has been found to reduce carbon dioxide emissions by as much as 78 percent. Hart’s goal is to use the fuel to bring about a 95 percent decrease in net pollution, making his operation “cleaner than most coal-fired power plants.”

The first locomotive will begin supplying power in 2003, but already Hart has won a 2002 Environmental Award from the U.S. government. He insists it’s just the beginning. “Railroads,” he says, “are the largest source of untapped electricity in the country.”