Why is the Knuckleball So Hard a Baseball Pitch to Hit?

Most important to the knuckler's is the pitch's erratic flight to the plate. 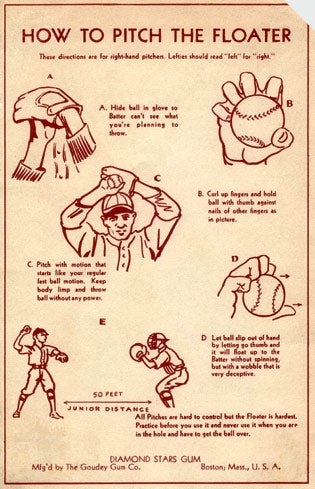 Want to throw a knuckler? In 1939, the price of knowledge was the cost of a pack of gum.

Batters see knuckleballs much less frequently than more conventional pitches. Of the thousands of professionals who’ve pitched in Major League Baseball, only 84 qualify as knuckleball pitchers, according to Knuckleball Headquarters. The rarity of the pitch, also called a floater, may contribute to its effectiveness: The more often a hitter sees a pitch, the better he can adjust his swing.

Most important to the knuckler’s evasiveness, however, is the pitch’s erratic flight to the plate-an effect achieved because the ball is thrown with little or no rotation. Without rotation, the knuckleball will flutter, dance, and generally behave unpredictably. (The key is to throw the ball with a stiff wrist.)

The science behind the knuckler was clarified when engineers Eric Sawyer and Robert Watts of Tulane University in New Orleans conducted wind tunnel experiments in 1975. They found that pressure would build up on one side of the ball and then the other, causing it to dart back and forth from its original trajectory.

One of the elite 84 knuckleballers, Jim Bouton, who won 21 games as a fastball pitcher for the Yankees in 1963, was able to extend his career as a knuckleballer after an injury robbed him of the fastball. An author as well, Bouton wrote the celebrated Ball Four. An update, Ball Four-The Final Pitch, appeared in 2000.

Bouton learned the pitch as a youngster from instructions on the back of a cereal box. He and his brother then threw hundreds of attempted knucklers in the yard, until he finally launched a genuine spinless pitch that dropped at the last minute, hitting his brother in the knee. “Ow!” the sibling yelled, “what a great pitch!”

“I spent my teenage years maiming my brother and father, and anyone else who tried to catch my knuckler,” Bouton remembers. Because he also had a blazing fastball, the teams he pitched for discouraged the knuckleball. “A fastball is like a jackhammer, and a knuckleball is like brain surgery,” he says. “I could not have mixed the two very well.”

After Bouton retired in 1970, he continued to pitch semiprofessionally in his free time exclusively as a knuckleballer, and launched an unprecedented return to the majors in 1978. He’s done a fair amount of thinking about the pitch.

“It’s part of Bernoulli’s principle, how air lifts airplane wings,” he says. “Because the knuckleball is moving through the air without spinning, air currents that flow over and under the ball are not equal, creating a disturbance immediately behind the ball.”

old musket balls from colonial times. When they came out of the muskets they would be accurate for only 15 or 20 feet, then they would destabilize, because of Bernoulli’s principle. Then they invented rifling in the barrels of guns. When a bullet comes out of a gun, the spiral grooves cause it to spin like a football. It’s that spinning that keeps it on target.” A knuckleball is like a musket ball-unpredictable.

Pitchers don’t need to know the science, though. “All you need to know is that if you put any kind of a spin on it at all, it’ll travel about 475 feet in the opposite direction,” Bouton says.

“Contact hitters, the guys who wait until the very last moment to get their bat on the ball, are the most effective against the knuckler,” Bouton points out. “Free-swinging home run hitters can be totally helpless.”

The knuckleball invariably taps a wellspring of humor, and Bouton offers one last laugh. “Remember what Bob Uecker (the announcer and former big league catcher) had to say about how to handle the knuckleball? You just wait until it stops rolling and then pick it up.”