Why the Towers Fell

Producer Larry Klein takes us behind the scenes of the NOVA documentary "Why the Towers Fell", a scientific look at the American Society of Civil Engineers' report of why the World Trade Center collapsed.

NOVA producer Larry Klein, who won a Peabody Award for his NOVA production Building Big, completes a six-month partnership with the American Society of Civil Engineers in order to bring NOVA viewers behind the scenes in the investigation into “Why The Towers Fell.” In the following essay, Mr. Klein reveals his personal feelings on this project.

Looking back over the months it has taken to produce “Why The Towers Fell,”
my most vivid memories come from the first day of shooting. After weeks of
tense negotiations and bureaucratic road blocks, we were finally allowed to
film the government-funded investigative team studying the precise reasons
for the collapse of the Towers. The investigation had been ongoing for about
a month since the attack, and we were losing valuable time if we were truly
meant to track the team´s progress and discoveries. With clearances finally
in hand, we left on a beautiful clear day to film at Ground Zero and at a
scrap yard in New Jersey. The scrap yard is where the steel from Ground Zero
is taken and then cut into two-to-three foot blocks for shipping to
“re-smelters” overseas. When I asked what this meant, I was told that one
day soon, the World Trade Center would come back to America, only this time,
we would be driving in it or sipping a soda from it or screwing it into a
wall. Recycled World Trade Center metal. Wow! The knowledge was somehow
arresting, as if all this mangled steel now piled into mini-mountains next to
the Hudson was actually the bones of the deceased being picked over by
vultures.

More disturbing, there was no visual relationship between these huge metal
mounds and the once famous New York skyline landmark that had made so many
cameo appearances in movies, television programs and print ads; nothing that
would let a casual observer know what the scrap mounds had been and what had
happened to them. Later that day, we went to Ground Zero and I was again
struck by the extraordinary anonymity of it all. There was not a discernable
piece of furniture anywhere. No computers or books or anything that would
identify this massive wreckage field as having once been several million
square feet of office space. There was only steel of various lengths and
thickness twisted into bizarre, pretzel-like shapes and an interlacing
gray-brown matter enveloping everything. I didn´t need anyone to tell me
that that gray-brown matter was the contents and insides of the World Trade
Center vaporized by the collapse.

The difficulty with finding any reliable information in all this mess seemed
daunting. Yet watching the American Society of Civil Engineers investigative
team scour the debris fields that day, gathering samples or measuring and
photographing steel fragments, was impressive. These forensic engineers were
looking for pieces of steel from areas of the buildings where the planes had
hit. When I asked how on earth they could know where a piece of steel
actually resided in two 110 story buildings that were now just countless tons
of rubble, I was shown numbers etched on the surface of a beam. The builders
of the Twin Towers had marked every piece of steel as to its floor and exact
location in the buildings. Like good crime detectives, these engineers came
to the scene knowing what to look for, and over the next several months they
found all the evidence they needed.

The NOVA documentary I helped produce will be the first official public presentation of
the results of this unprecedented disaster study. The 22-member study team
from the American Society of Civil Engineers was commissioned by FEMA
(Federal Emergency Management Agency) to perform the investigation, and the
fully written report, called a Building Performance Study, will be made
available to the public on May 1.

NOVA presents an exclusive scientific look at the American Society of Civil Engineers’ report of why the World Trade Center collapsed. NOVA’s “Why the Towers Fell” airs Tuesday, April 30, 2002, at 8 PM ET on PBS.

For most Americans, the image of the collapse of the World Trade Center
Towers was not only a scene of unforgettable horror, it was a moment of
unimaginable consequence. Who could have guessed that a steel behemoth of
such size and strength-a building so massive that it had its own zip
code-could actually be reduced to 150 feet of dust and rubble? NOVA offers
viewers an exclusive look at the American Society of Civil Engineers’ (ASCE)
report into the root causes of the Towers´ collapse by following a team of
structural and fire engineers during their fascinating and intricate study.
NOVA’s cameras were allowed exclusive access to the team of twenty-five ASCE
engineers as they studied the remains of the buildings that fell on September
11. NOVA presents Why the Towers Fell, Tuesday, April 30, 2002, at 8 PM ET
on PBS (check local listings). The ASCE final report is tentatively
scheduled for formal release by the Federal Emergency Management Agency
(FEMA) May 1, 2002.

In the aftermath of the collapse, the questions came quickly and urgently:
was it inevitable that such a severely damaged structure would completely
collapse? Or was there something about the building´s design or construction
that made it especially susceptible to failure? What exactly caused that
failureâ€-fire, heat, internal damage? Was the evacuation plan adequate
enough to save the maximum number of lives? And are other tall buildings just
as vulnerable to collapse when the blast is great and the fire uncontrolled?
In the gray wasteland of smoke and dust and mangled steel that was once the
third tallest building in the world, forensic engineers began sifting the
wreckage for clues and answers to these and other structural truths. This
blue-ribbon team of engineers is nearing the end of its task, and NOVA has
been there from the beginning, following its investigation of the causes of
the calamity. Why the Towers Fell presents the engineers´ conclusions in the
most definitive explanation yet of how and why the towers collapsed.

But the Twin Towers weren´t the only buildings that collapsed. Standing well
over a city block from Trade Center Tower #1, a forty-eight-story glass and
steel structure known simply as Building #7 did not seem to suffer structural
damage from the collapsing towers but nonetheless crashed to the ground after
several hours of severe and uncontrolled fire. Since Building #7 is a typical
glass and steel building and seems to have collapsed from fire alone, does
this mean that office workers the world over are far more vulnerable than
anyone ever imagined?

Featuring many of this country´s best structural engineers including Gene
Corley, the lead investigator on the Oklahoma City bombing; Charles Thornton,
the builder of the Petronas Towers (the world´s tallest building); and Mark
Loiseaux, the leading expert on the “purposeful” demolition of big buildings,
the program takes viewers through the process by which these professionals
came to understand the how´s and why´s of one of modern America´s greatest
tragedies. Also presented are several of the buildings´ survivors, who tell
compelling real-life stories of their harrowing journeys to safety, including
three firemen who miraculously escaped death as Tower #2 collapsed around
them. This NOVA will feature rare, video-enhanced footage showing details of
the buildings´ structural damage never before seen on TV, and detailed
animation sequences that let viewers “see through” the buildings to the
damage that had occurred inside. 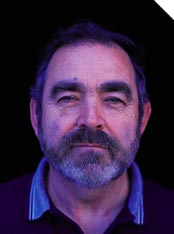 Master woodcarver Larry Parks has meticulously recreated the Wright brothers’ propellers, down to the tool marks they left on the wood. 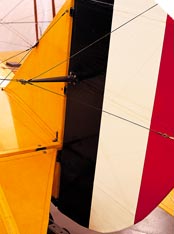