For 150 years scientists believed that stable magnetic levitation was impossible. Then Roy Harrigan came along. 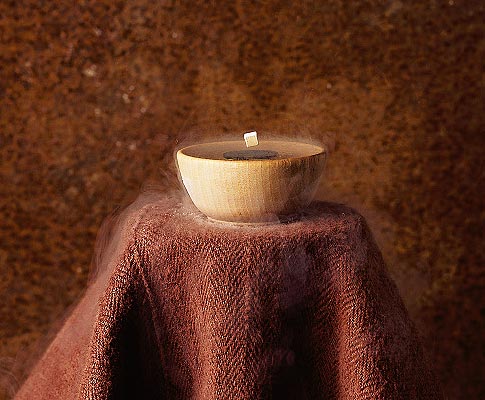 A diamagnetic superconducting ceramic disc is an exception to Earnshaw’s theorem that states that stable magnetic levitation is possible.

If you’ve ever tried to float one magnet over another (and who hasn’t?), you know that the stupid thing just keeps flipping over–an irritation formalized in 1842 when the Rev. Samuel Earnshaw published his famous theorem establishing mathematically that such magnetic levitation just can’t be done. From that point on, any experimenter caught playing with magnets courted the derision of his colleagues: “Ha, ha, look at Fred over there trying to balance magnets! I guess he never heard of Earnshaw’s theorem!” Physicists can be so cruel on the playground.

Well, not so fast. It turns out that Earnshaw’s theorem is absolutely correct, but it has a couple of loopholes large enough to drive all sorts of stable magnetic levitation devices through, including one you can now buy in any novelty shop for about $30: the Levitron. (For more info go to levitron.com)

This spinning top, which hovers above a magnetic base, was patented in 1983 by a Vermonter named Roy Harrigan. Harrigan had one distinct advantage over all those scientists who had tried and failed to levitate magnets before him: complete ignorance of Earnshaw’s theorem. Having no idea that it couldn’t be done, he stumbled upon the fact that it actually can. It turns out that precession (the rotation of a spinning object’s axis of spin) creates an island of genuine stability in a way that does not violate Earnshaw’s theorem, but that went completely unpredicted by physicists for more than a century. (Though after spending half an hour getting the Levitron to work, I was willing to cut the blinkered physicists some slack. I can only imagine how Harrigan must have felt the moment he finally got the thing floating after years of effort.)

A second Earnshaw exception: diamagnetism. His theorem only applies to ferromagnetism, the common north/south pole type of magnetism found in most magnets. Diamagnetism is a purely repulsive magnetic force exhibited to varying degrees by all materials in the presence of a magnetic field. Simply drop a chip of graphite, for example, onto a block of magnets and it will float in midair forever. I’ve had some chips hovering in my office
for six months. A superconducting ceramic disc is also a perfect diamagnetic material, and floating a magnet over it is so easy and stable that you can knock the magnet around with your fingers and it won’t fall off. (Ten years ago this was new and exotic, but today you can buy a kit for $40.)

Chips of graphite, by the way, aren’t the only diamagnetic objects you can levitate. Researchers in the Netherlands have successfully levitated water droplets, hazelnuts, frogs and even a hamster named Tisha. In theory, it should even be possible to levitate humans, although no one has actually done so yet.

How could people possibly have missed these maglev possibilities for so long? The power of negative thinking, simple as that. In my day job as a creator of the scientific software Mathematica, I remember Earnshaw’s theorem whenever I’m told something can’t be done. It’s much better to assume that it can be done, then get to work on the possibilities. That’s how breakthroughs are made.