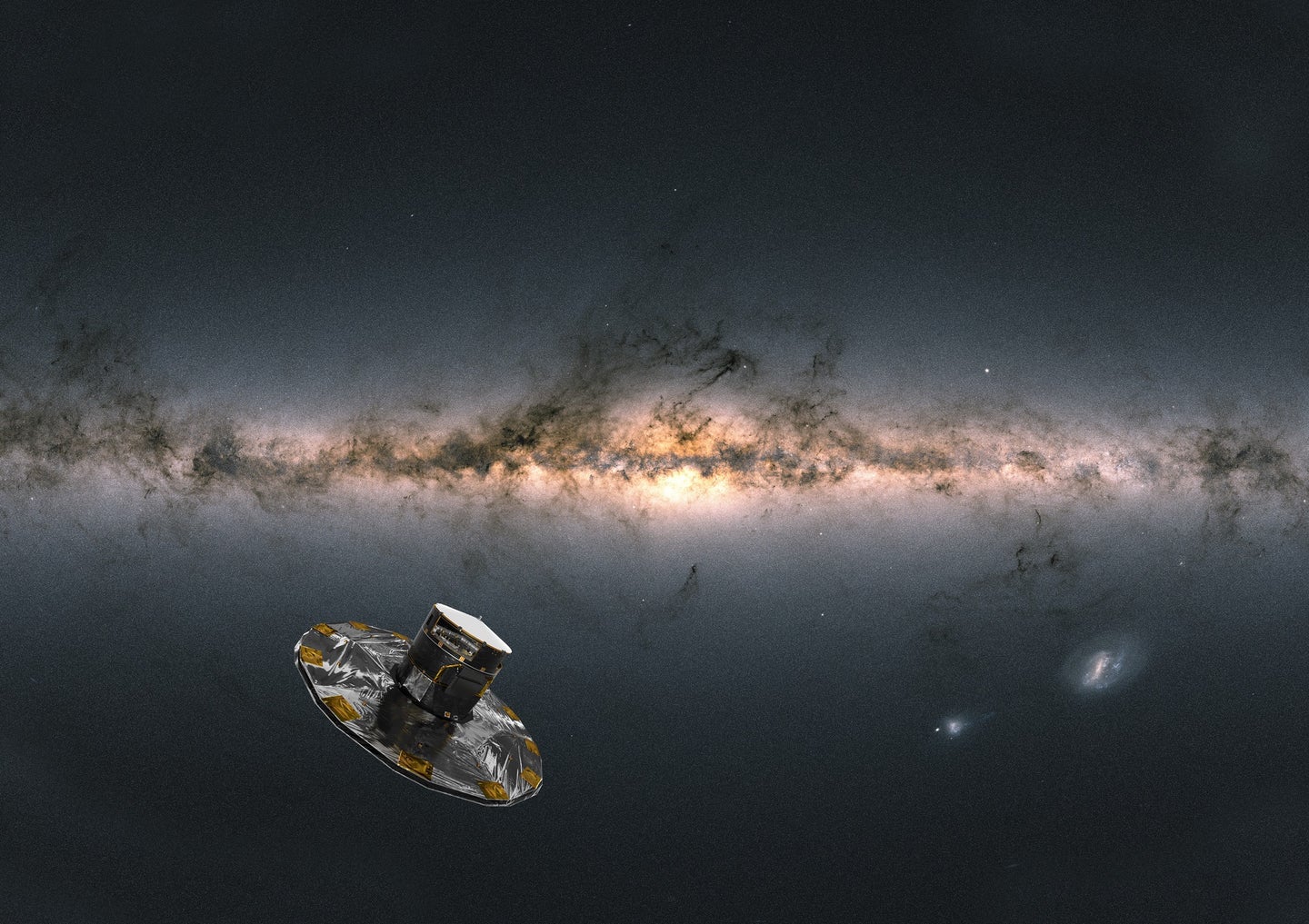 When you see a distant star in the night sky, it might twinkle and look like it has five points. This is largely a trick of the eye. Zoomed in, most stars are just round balls of gasses and dust. As they age, heat up, consume other matter, and sometimes explode, they take on more abstract and asymmetrical shapes—unlike the pentagrams you scribble on your notebook.

Now let’s zoom out again, way beyond Earth’s field of view. The imprints of individual stars form clusters—more complex than the constellations you know—which mold the immense systems underpinning the universe. These formations are so vast, it’s hard to even guess where their contours might fall.

That’s why astronomers need Gaia. The space observatory, which consists of two spinning telescopes and three “motion detectors,” is mapping out stars and other celestial bodies across the Milky Way. Since it launched in 2013, Gaia has pinpointed 1.8 billion objects, like a “stellar stream” that’s about a billion years old. The mission produced a near-complete 3D rendering of the home galaxy back in 2018, and continues to churn out data for researchers to tinker with.

[Related: Astronomers just mapped the ‘bubble’ that envelops our planet]

In its latest haul of knowledge, Gaia shares a more intimate profile of the stars it’s documented. On June 13, the European Space Agency (ESA) posted fresh findings from the project, including a trove of light spectroscopy images and records of tsunami-sized tremors across the Milky Way.

“The catalog includes new information including chemical compositions, stellar temperatures, colors, masses, ages, and the speed at which stars move towards or away from us (radial velocity),” the ESA wrote on its website. “Much of this information was revealed by the newly released spectroscopy data.”

“Previously, Gaia already found radial oscillations that cause stars to swell and shrink periodically, while keeping their spherical shape. But Gaia has now also spotted other vibrations that … change the global shape of a star and are therefore harder to detect,” the ESA explained in its post. One of the project collaborators noted that the measurements could be pivotal for the field of asteroseismology, too.

[Related: Inside the tantalizing quest to sense gravity waves]

Meanwhile, the spectroscopy data breaks down starlight like a prism to reveal the contents, distance, and potential origins of the sun’s relatives. Gaia found primordial Big Bang material in some stellar signatures, along with an abundance of metal in denizens at the Milky Way’s core.

“Our galaxy is a beautiful melting pot of stars,” Alejandra Recio-Blanco, a galactic archaeologist at the Observatoire de la Côte d’Azur in France, said in a statement. “This diversity is extremely important, because it tells us the story of our galaxy’s formation. It reveals the processes of migration and accretion. It also clearly shows that our sun, and we, all belong to an ever changing system, formed thanks to the assembly of stars and gas of different origins.”

Watch the video below for a deeper dive on the new Gaia information—and a teaser of what’s next for the mission.