The Human Cell Atlas is pinpointing where our bodies break down

The attempt to map every human cell is revealing previously hidden patterns. 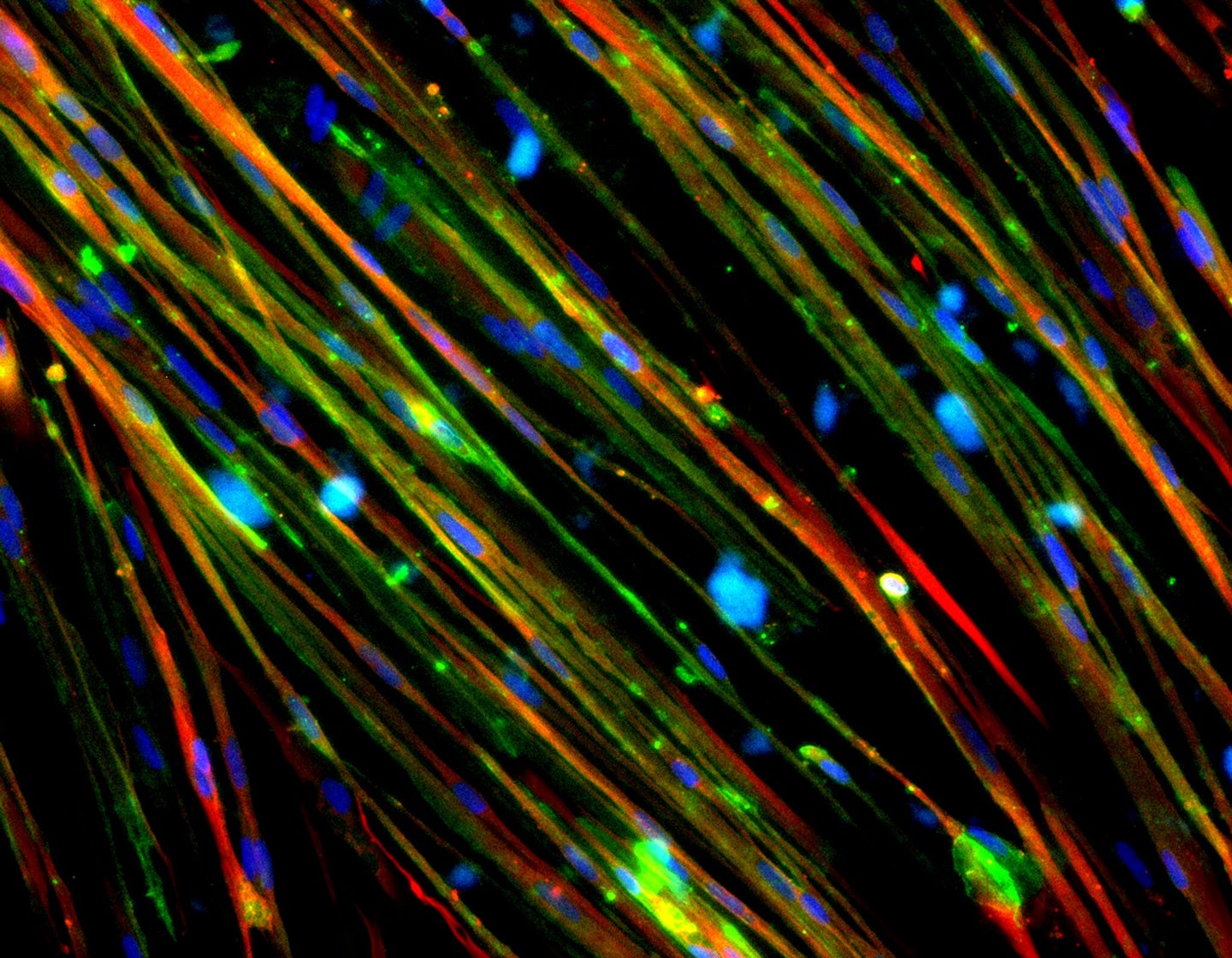 A number of rare muscular disorders, such as Duchenne muscular dystrophy, start with an atypical version of a single gene.

But every cell in the body of a person with the disorder contains that variant. So the question is: How does that gene trigger a disease in skeletal muscle, rather than one in the heart or in the intestines? After all, those organs contain their own types of muscle.

As research from a team of cell biologists and geneticists showed this week, many muscular disorders are caused by genes expressed not in muscle cells, but in all the support cells around them. That finding was included in one of four studies published together this week in the journal Science by the Human Cell Atlas, an international collaboration funded both by government research agencies and several nonprofits, which aims to catalog every cell in the body. It hints at the power of the Cell Atlas to illuminate how the raw information in our genes is used to assemble a living, breathing human.

“People often think about the genome as the blueprint of the organism, but that’s not really correct,” says Stephen Quake, a bioengineer at Stanford University and the Chan-Zuckerberg Biohub, at a Human Cell Atlas press briefing on Tuesday. “The genome is more like a parts list.” Each cell only uses a specific set of pieces from its DNA to build the proteins it needs, whether its role is to transmit electrical pulses or pump blood.

A muscle is also full of fat cells, nerves, and connective tissue, and all of those are specialized to work together as an organ. The consortium’s work has led to a key insight: A muscle fiber with a broken tool can cause muscular dystrophy—but a malfunctioning fat cell or nerve cell may do so too.

With an almost omniscient view, Human Cell Atlas researchers can start to see how cells across the body use their genetic blueprint to create our life-sustaining organs. They can also begin to pinpoint how a single gene leads to a malfunctioning cell and then a full-body disease. Together, their studies document several technological advances and experiments—from surgeries, to extracting information from frozen tissue, to computational tools—that allowed researchers to peer inside half a million human cells from more than 30 organs all at once.

Aviv Regev, head of research and early development at the biotech company Genentech, the Cell Atlas’ co-chair, and a co-author on the muscular disorder research, compares the work to Google Maps, able to sharply zoom in on a particular molecule within a specific cell. “And you can zoom out and say, ‘Here are how the cells are organized next to each other, and this is where it is inside the organ,’” she says.

Over the past decade, researchers have become adept at understanding how individual cells—like a single muscle fiber—function. But the map-like perspective will allow biologists to ask questions about how cells relate to their neighbors, and what makes something like nerve cells different in different places across the body.

“If you think about it from a therapy point of view,” says Regev, “there is no point of fixing the muscle cells if it’s actually the new cell in the tissue that is broken.”

With an atlas, mysterious features of a disease can suddenly make sense. Patients with Duchenne muscular dystrophy, who have a misformed protein normally used to help muscle tissue heal after use, sometimes experience excruciating gastrointestinal disorders. “It’s hard to explain it,” says Regev. “Why? What’s the relationship between issues with your motor system and your gut?” As it turns out, the gene that causes Duchenne muscular dystrophy is expressed not just in muscle tissue, but in the lining of the esophagus and the nerve system that controls the gut. The gene’s effects, dispersed throughout the body, illustrates how it could lead to both symptoms.

Although the team identified thousands of possible links between gene expression, specific cells, and diseases, Gökçen Eraslan, a postdoctoral fellow at Genentech, and the paper’s lead author, cautions that they’re all hypotheses. “This is not a muscle paper,” he says—instead, it’s a way of looking at muscles to generate entirely new research questions.

Among the questions raised is how we study muscular disorders. Mice, a classic lab model for Duchenne muscular dystrophy, experience the disease very differently from humans at the cellular level. Among other things, humans use lots of the characteristic gene in fat cells within muscle fibers—mice don’t.

“This is a really striking example of how the human and the mouse are not the same,” says Regev. “When we develop medicines and so on, we often work a lot with mice—we have to—but it’s really important to know what’s the same and what is different.”

Tracing a single gene from variant to cell to disorder was the project’s most straightforward approach to tracking a disease. The researchers also looked at diseases that are linked to clusters of genes, like type 2 diabetes or heart disease. In those cases, geneticists have previously found risk factors, but no clear pathway from gene to disorder. The atlas, however, offers clues.

The risky genes for type 2 diabetes are used in certain muscle cells that have been connected to insulin resistance. But the genes are also used in the lining of blood vessels and the heart, says Ayellet Segrè, a geneticist at Harvard University and a co-author on the research. Though Segrè notes this is still a working theory, the observation suggests “the genes that are acting in these [blood vessels] may be affecting the increased risk for vascular disease”—implying that both diseases have an underlying cellular root.

Another analysis suggested that sperm and certain lung cells used the same sets of genes. “Initially we were really puzzled,” says Eraslan. But when they went into medical literature, they saw a well-documented real-world connection between bronchitis and sperm function. Both cells, it turns out, rely on the same set of genes to build cilia, the waving “tails” that power sperm and clean the surfaces of the lung.

“There are certain patterns that become really obvious as you zoom in,” says Eraslan. “And this was the case for the last decade—studies take one tissue and zoom in as much as possible. But certain patterns become visible only as you zoom out.” Hidden genetic links between cell types probably crisscross our bodies—we just can’t see them without a map.