Nobody has ever witnessed a drop fall from this demonstration, which has run continuously for 86 years. 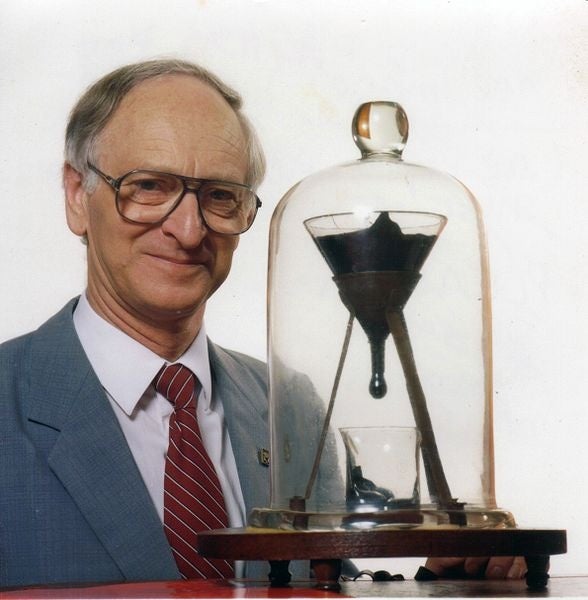 The drop never fell for physicist John Mainstone, but many of his colleagues and students may get to witness it later this year.

Mainstone, the custodian of the world’s longest-running science experiment, died in his sleep on Friday. He was 78.

University of Queensland physicist Thomas Parnell began the experiment in 1927 by warming and pouring pitch—an extraordinarily viscous derivative of coal—into a funnel over a beaker. Parnell was trying to demonstrate that although pitch is so brittle that it’ll shatter under a hammer blow, it is actually a liquid at room temperature and will flow and form drops. The only problem was that the drop formation is extremely slow, with eight and nine years passing between the first three drops.

By the time Mainstone joined the University of Queensland faculty in 1961, Parnell’s pitch drop demonstration had been relegated to some dusty cupboard. Mainstone convinced the physics department to bring it out and display it.

Mainstone never personally got to see a drop fall, however. Neither did Parnell, nor anybody else in the world. Another pitch-drop experiment at Trinity College Dublin did create a drop this July that the college caught on camera. That demonstration began after the University of Queensland’s, in 1944.

Although it takes years to form a drop, it only takes a few seconds for one to fall, and the exact time of the fall is unpredictable. One of Mainstone’s drops fell in 2000, but the cameras trained upon it malfunctioned. There’s a live camera aimed at the experiment right now. The feed looks eerily like a still photo.

Mainstone got an Ig Nobel in 2005 for “leading” the pitch drop experiment, but we’re guessing the experiment didn’t actually take up any of his time or taxpayer money or anything. (Except for those cameras.) The experiment is a curiosity and a bit of science décor for the University of Queensland.

Mainstone researched the physics of the Earth’s atmosphere, Australia’s ABC News reports. Before his death, he suffered a stroke and was treated by two cardiologists who had once been his students.

Earlier this year, he said he thought the next drop would fall before the year was out, PhysOrg reports.