In a new study, "hypersexual" brains don't respond to sexual images the same way that drug addicts' brains respond to images of drugs. 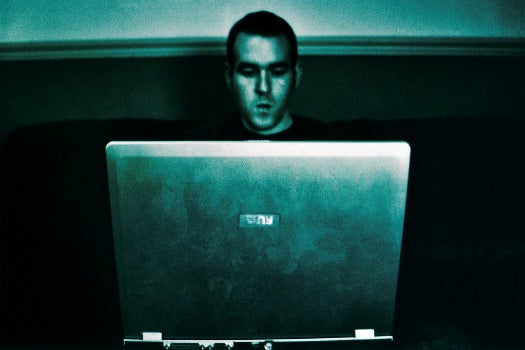 Though it’s a popular excuse for celebrity infidelity, there’s some debate over whether sex addiction actually exists. The latest edition of the psychiatrist’s bible, the DSM, is little help on the subject, listing hypersexuality (i.e. sex addiction) as a condition that will require more research before it gets a category in the book.

In the first study of its kind, a group of researchers recently tried to pin down whether neural responses to sexual imagery could be predicted based on symptoms of hypersexuality, a major step in determining whether sex can be seen as addictive in the same way heroin or nicotine are.

Meanwhile, electroencephalography (EEG), those weird-looking scalp hook-ups, measured the neurons firing in their brain. Addiction researchers focus on the brain’s activity 300 milliseconds after the picture pops up, called the P300, because the brain’s electrical response to stimuli tends to peak then. Increased P300 responses are associated with addiction.

However, the study found that there was no relationship between P300 and hypersexual measures. “Brain response was only predicted by a measure of sexual desire,” study author Nicole Prause told Psychology Today. “In other words, hypersexuality does not appear to explain brain differences in sexual response any more than just having a high libido.”

The data “fail to provide support for models of pathological hypersexuality,” the researchers write in the paper. Prause went on to explain that this “suggests that hypersexuality explains nothing in particular about brain responses to erotica,” or that possibly the relationship between the two is too small to see with EEG.

Since this is the first study to measure neural reactivity to sexual images, the authors maintain that the results will need to be replicated and extended before we can throw the term “sex addiction” out the window.

The full paper is published this week in the journal Socioaffective Neuroscience and Psychology.