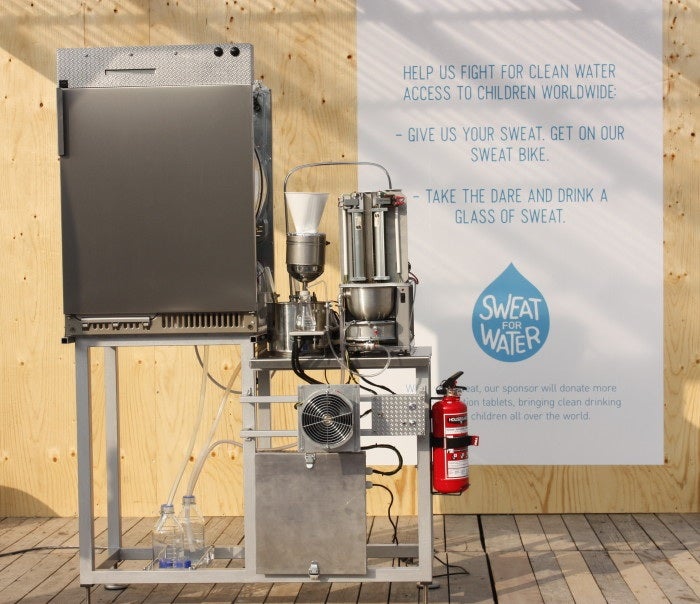 The Sweat Machine heats and spins clothes to extract the liquid from them, then filters the extract with a membrane developed with the Royal Institute of Technology in Stockholm. Yum.

The filter is the most sophisticated part of the machine. It’s “a bit like Goretex,” one of the machine’s designers, engineer and Swedish TV host Andreas Hammar, told the U.K.’s The Independent. Water vapor passes through the material easily, but it traps bacteria, salts and fibers from the clothes.

Fans watching the Gothia Cup, an international youth soccer tournament held in Sweden, will get to see the Sweat Machine at work during the game. Players Tobias Hysén and Mohammed Ali Khan have promised to drink a glass of water extracted from their own sweat, according to UNICEF. Anybody else interested in getting a taste can try, too.

The demonstration is supposed to draw attention to the fact that 780 million people around the world don’t have access to clean drinking water. Contaminated water can be deadly, especially for children. UNICEF will be raising money for a more practical solution for those kids—water purification tablets.

Want to see a more practical water-recycler at work? The International Space Station hosts a system that captures astronauts’ sweat and urine and turns it into potable water. The space station uses the same type of filtration as the Sweat Machine, Hammar told The Independent, but the Sweat Machine was a bit cheaper to build.