This Bacterium Can Do Division, Compute Logarithms And Take Square Roots 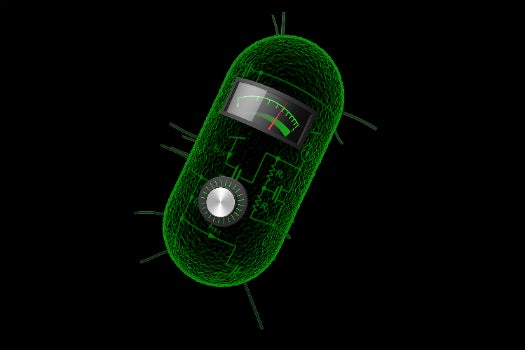 A group of engineers from MIT have created analog calculators out of living cells, according to a paper published online in Nature yesterday. By tweaking the genes of bacterial cells, the researchers were able to create circuits that can perform calculations–including division, multiplication, logarithms and square roots–in a much more efficient way than many existing biocomputers.

Using analog circuits, which harness a cell’s natural biochemical functions, allows for more nuanced computations than imposing digital logic. While digital circuits classify all values as zeros and ones, analog circuits can handle a continuous range of inputs, allowing for values in between. In addition to computing whether or not a molecule like glucose is present, these circuits can tell its concentration, for instance.

“Analog computation is very efficient,” senior author Rahul Sarpeshkar said in a press statement. “To create digital circuits at a comparable level of precision would take many more genetic parts.”

A synthetic circuit that calculates square roots, for example, requires more than 100 parts, while the MIT team’s analog circuit only uses two parts.

To create a circuit that could multiply, researchers combined two circuits that both turn on the genes for green fluorescent protein, or GFP. One used a sugar called arabinose, and the other used a signaling molecule called AHL. The combined input from both are then calculated using the total amount of GFP.

The cell divides using the same enzyme mechanism that helps it calculate the ratios of different molecules. The researchers modified the circuits to expand their range and compute inputs up to 10,000.

The researcher’s future goal is to replicate their success with bacterial cells in larger cells, including mammalian cells. Karpeshkar aims to create new circuits that can improve gene expression, molecular sensing and computation, according to MIT. “We have just scratched the surface of what sophisticated analog feedback circuits can do in living cells,” he said.