So... how can we weaponize this? 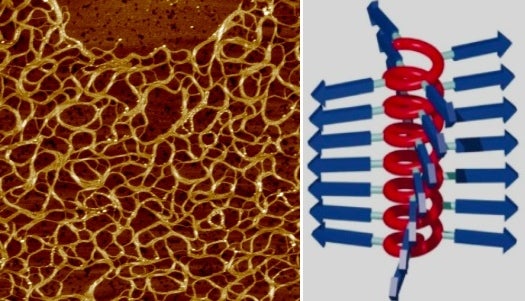 Like Vonnegut's Ice-Nine, but gelatinous consequences. Left: The polymer structure captured be atomic force microscope. Right: The polymer's helical backbone and tails that connect to other polymer strands. A. ROWAN ET AL / RADBOUD UNIVERSITY OF NIJMEGEN via Nature
SHARE

Dutch researchers have developed a gel-forming polymer so effective that a kilogram of the stuff sprinkled across an Olympic sized swimming pool would turn the entire thing to jelly. At least, that’s how they describe the properties of polyisocyanide polymer, which they’ve just revealed to the world in the journal Nature. Materials scientist Alan Rowan at the University of Nijmegen in the Netherlands calls it the best gel-forming polymer in the world, “an order of magnitude better than anything else.” All you have to do is add a little heat.

This is cool on a number of levels. First of all, though the researchers have not yet experimented with a real Olympic swimming pool, the ability to rapidly turn large bodies of water into gelatin is sure to have major impacts in the disciplines of both cocktail party tricks and teenage petty vandalism. But from a materials science standpoint the polymer really is a breakthrough, exhibiting properties that are pretty strange and exciting, at least if you’re the kind of person who gets excited by material properties.

For one, most gels form upon cooling, not heating (think: Jell-O), which opens the door to some interesting potential applications. Further, polyisocyanide polymer is the first to demonstrate a rigidity that matches that found in biological polymers. Almost all naturally occuring biopolymers possess a kind of inherent rigidity that synthetic polymers simply lack, but Rowan’s polymer is an exception. Its polymer strands consist of a helical backbone surrounded by short peptide arms sticking out from the sides. Each of these peptide arms is in turn tipped with a long tail of repeating carbon and oxygen chains that are nicely suited to grabbing water molecules, making it quite soluble.

But once dissolved, heating it causes the tails to push water molecules away and link up to other tails belonging to other polymer strands, rapidly building a polymer structure with the water trapped in between. The result is a gel that forms within seconds once the water/polymer mix hits a certain temperature (it’s unclear exactly what that temperature is, and it may vary depending on external factors).

Beyond Olympic-pool-sized servings of gelatin, such a fast-forming gelatin mixture could be used to quickly plug open wounds–simply pour in the cold mixture in and let body temperature stiffen it up. This polymer bandage could then be later removed with nothing but an ice pack.