XKCD Presents: The Up Goer Five

Is the Saturn V by any other name just as awe-inspiring? 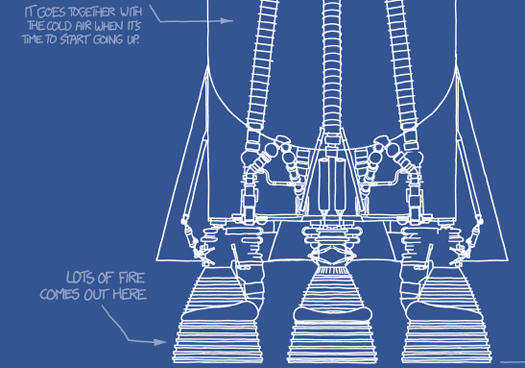 One of the biggest hurdles to understanding any technical field is mastering the bewildering array of specialty words and terms. We at PopSci try very hard every day to take a difficult, jargon-larded concept and break it down as plainly as we possibly can. I was especially amused with XKCD‘s attempt to render the blueprints — and functions of each part — for the Saturn V rocket into what should be the most layman of laymans’ terms: the 1,000 (“ten hundred”) most commonly used English words.

The resulting graphic of the “Up Goer Five” is absurd, as it should be. But it also very clearly illustrates that, while it’s possible to describe the Up Goer Five with ten hundred words, one kind of misses the interesting nuance. Cold air for burning. This part had a very big problem once is likely an allusion to the Apollo 13 oxygen-tank explosion that made a lunar landing impossible. And Kind of air that once burned a big sky bag and people died and someone said “Oh, the [humans]!” refers to the Hindenburg disaster (or to WKRP in Cincinnati, if you are a fan of Les Nessman). The Part that flies down to the other world is the Lunar Module.

That’s all fairly straight forward. But what to make of the label Full of that stuff they burned in lights before houses had power. Tallow? Whale oil? Beeswax?

Sometimes, there’s just no substitute for a word like “ullage” — or “kerosene,” for that matter.