In the ongoing hunt for Martian life, there’s one place astronauts haven’t yet explored deeply: caves. But to delve into... 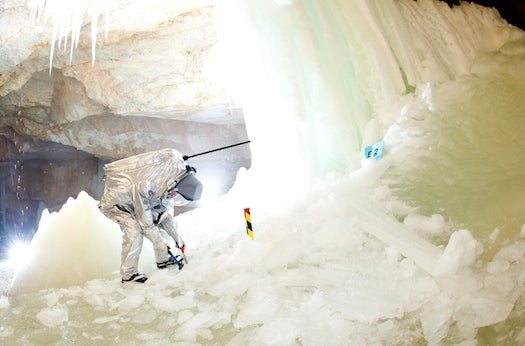 In the ongoing hunt for Martian life, there’s one place astronauts haven’t yet explored deeply: caves. But to delve into Martian caves calls for some heavy-duty gear, and where do you test Martian caving gear on Earth? The Austrian Alps.

See our gallery of the most space-like environments on Earth.

A team of volunteers spent five days at the end of April test-driving spacesuits and planetary rovers inside the ice caves of the awesomely/terrifyingly named Eisriesenwelt — German for “World of the Ice Giants.” On Mars, explorers might run up against limestone caves or ice caverns, and Eisriesenwelt, a series of labyrinthian caves in central Austria cold enough to freeze all water inside, has both. The Martian incarnations are cold but temperatures are stable, there’s less humidity than on the surface of the Red Planet, and they provide shelter against radiation from space — the ideal recipe for sustaining life.

Researchers from the Austrian Space Forum, NASA’s Jet Propulsion Laboratory, and 11 other countries on three continents ran a series of tests 4,265 feet above sea level to see just how well the equipment could hold up under strenuous conditions.

For a spacesuit, volunteers donned the 100-pound Aouda.X suit, which insulates the wearer with an aluminum-coated Kevlar-Panox textile. The Aouda.X is packed with enough monitors — for body temperature, heart rate, and carbon dioxide and oxygen levels — to make sure the person inside is always out of harm’s way. Researchers also stayed in touch over a radio, directing volunteers toward potential ice and other samples.

Some of the many rovers sent along for testing included a cliff reconnaissance vehicle and a quadrotor drone. At least one lesson was learned: a cliff-climbing bot and a more standard surface-dwelling bot make a good team, and might have some potential as a combined machine one day.

There was a slip-up during testing when one volunteer’s headset fell off; researchers opened up the helmet to repair it, which isn’t exactly what you want to do while on Mars. That and a few other things offered some lessons. Gernot Grömer, president of the Austrian Space Forum, told Astrobiology Magazine “yes, we can do subsurface exploration, but we need to adjust our way of conducting Mars exploration significantly.” When the real deal happens, it’ll take astronauts 20 minutes to get a message across to home, and there won’t be anyone except other explorers there to help.

The researchers’ next test run will be in the northern Sahara in Morocco in February 2013. 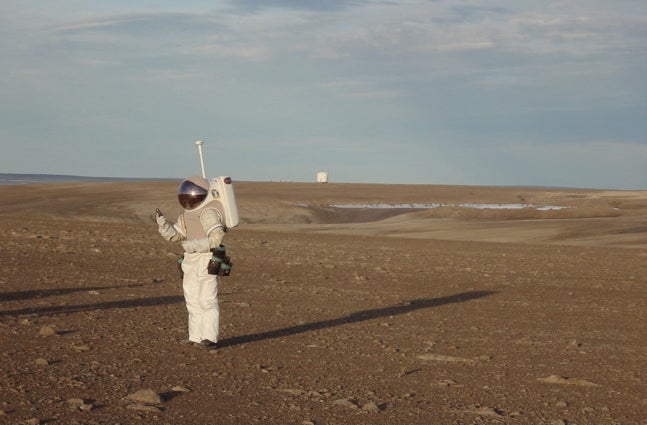 The Haughton Mars Project tested equipment and people bound for Mars – at a much more convenient location. Devon Island, Canada, is the world’s largest uninhabited island, home to the Haughton crater, which is a 12-mile diameter impact area where a meteorite hit Earth 23 million years ago. The rocky Arctic polar desert setting, geologic features and biological attributes of the site offer unique insights into the possible evolution of Mars, say the researchers – in particular, the history of water and of past climates on Mars, the effects of impacts on Earth and on other planets, and the possibilities and limits of life in extreme environments. While no environment can come close to Mars’ extremes in minimum temperature, dryness, low atmospheric pressure and harsh radiation conditions, the Arctic desert is just about as close as scientists can get. Pictured: Dr. Jeff Jones of NASA Johnson Space Center tests a space suit prototype in a late-night simulation. 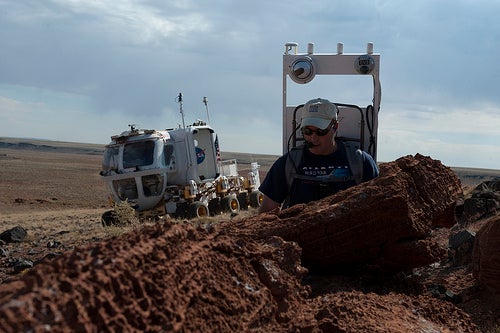 At Home in the Desert

NASA’s Desert Research and Technology Studies (D-RATS) program works on developing human and robotic systems in the desert of Arizona. The dry, dusty terrain and extreme temperature swings make the desert a good place to test rovers and habitation units that will eventually be used on the surface of other planets. The testing has happened in the same desert location since 1998. Last year, the gear tested included a high-tech space truck for drives on a planetary surface, a robotic rover assistant, astronaut habitats, space suits and deep-space communication systems. One new technology was the Space Exploration Vehicle – a transforming car that can be configured to fly freely through space, or can sit atop a 12-wheeled chassis to become a burly, capable rover about the size of a pickup truck. Its pressurized cabin can carry two astronauts on 14-day trips, according to NASA. Also tested was NASA’s Centaur rover, a gleaming gold vehicle that can carry the agency’s dexterous humanoid robot helper, Robonaut. Other tools, such as digging implements, could also be affixed to the Centaur. All of this is for good reason: NASA also has an asteroid sample-return mission in the works. This effort, known as Osiris-Rex, should bring pieces of the asteroid 1999 RQ36 back to Earth in 2023. Pictured: Astronaut Scott Tingle performing an Extravehicular Activity (EVA) during D-RATS 2011 testing. 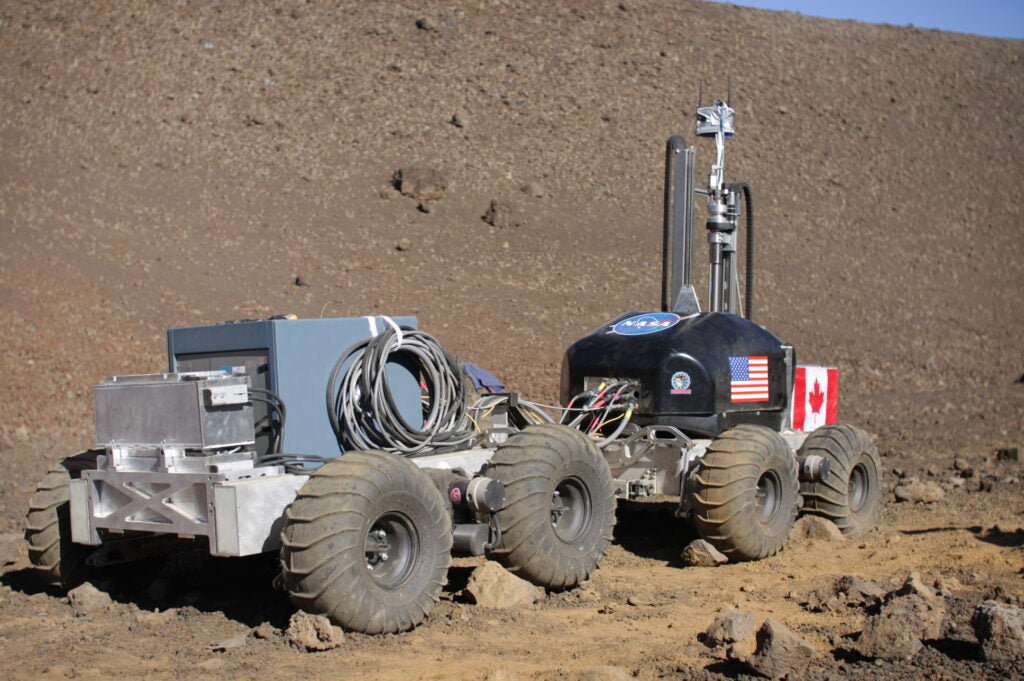 Even though most people prefer its beaches or lush greenery, Hawaii has some pretty rugged landscape, especially on the side of Mauna Kea, a remote and cold dormant volcano on the “Big Island” of Hawaii. On the lower slope of Mauna Kea, at a site that resembles a lunar crater, NASA and its international partners are advancing future space exploration. Researchers there are looking at ways to search for water ice in lunar or planetary environments, and ways to extract, store, and use minerals, metals, and sunlight. In 2010, a project dug up oxygen-rich soils, similar to those present on the moon. To utilize that natural resource, Canadian engineers developed a Regolith Excavator. On Mauna Kea, the excavator digs and then delivers volcanic material, called tephra, to a device that melts and processes the material with methane to produce water. The water is then electrolyzed, or split, into hydrogen and oxygen. The oxygen is liquefied and stored for later use, and the hydrogen is used to regenerate the methane reactant or stored and used to power other experiments with a fuel cell. 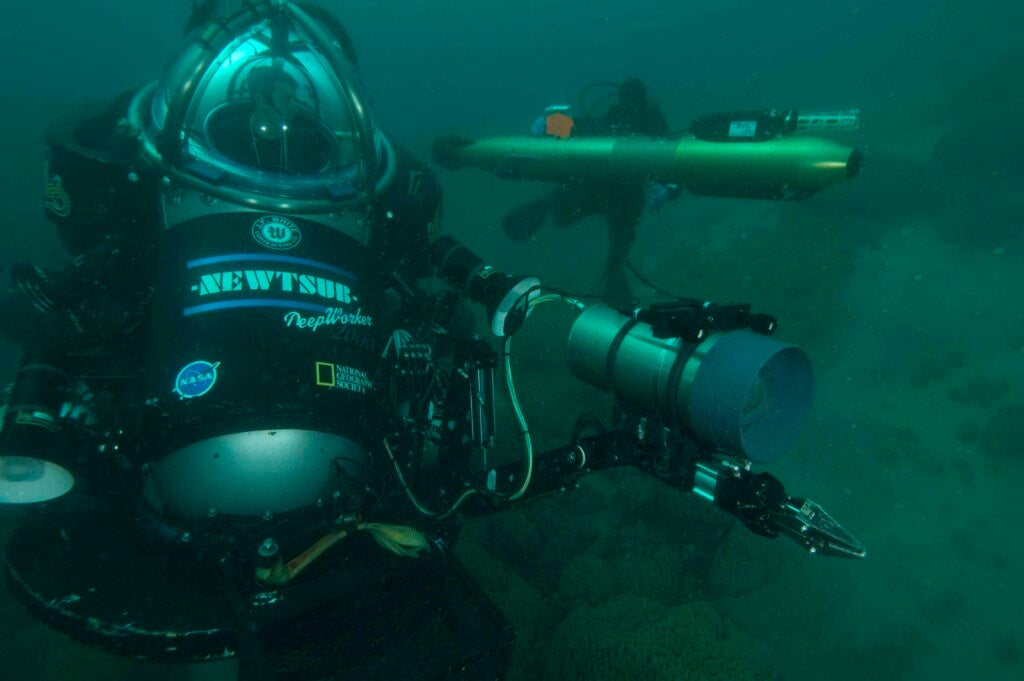 Origins of Life in a Chilly Extraterrestrial Lake

Deep under the waters of Pavilion Lake in British Columbia, Canada, NASA has teamed up with international organizations to study the origin of the freshwater microbialites – present-day cousins some of the earliest remnants of life on ancient Earth. Astrobiologists are applying findings from this research to the search for life in our solar system and beyond. In Pavilion Lake, researchers use DeepWorker subs to mimic the ways a robotic precursor mission would explore a near Earth asteroid. Refining the process, including managing challenges like a communications delay, in the context of the lake will make it easier when humans reach an asteroid surface. Pictured: A Deepworker sub looks out the window at microbialites and the UBC-Gavia Autonomous Underwater Vehicle 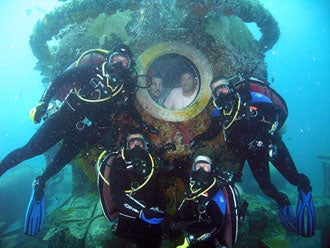 Living on the floor of the ocean in Florida can be a good way to simulate what it’s like to be on the International Space Station – at least that’s what NASA thinks. Aquarius is the world’s only permanent underwater habitat and laboratory, and it lies about 3.5 miles off the Key Largo coast. Long-duration missions, which last up to three weeks, help astronauts find out what it’s like to live on a spacecraft and execute undersea space walks and rover-drives. This summer, they will undertake a week-long mission to replicate conditions on an asteroid. Pictured: NEEMO 12 crew members pose for a group photo at their undersea habitat as they begin the 12th NASA Extreme Environment Mission Operations mission. 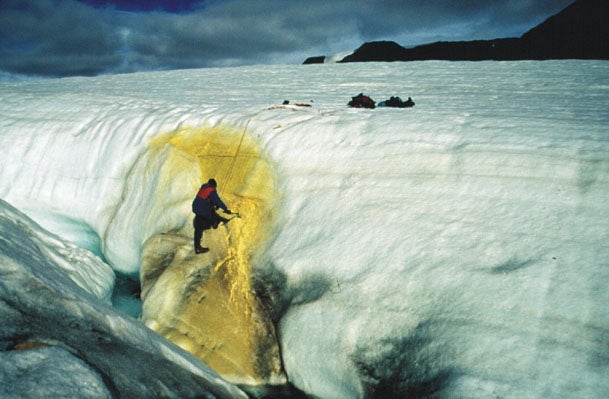 Burping Sulfur on the Moons of Jupiter

The Sulfur Springs of Borup Fiord Pass, Ellesmere Island – about 1,000 miles north of the Haughton Crater — provide an ideal habitat to prepare for a geological study of Jupiter’s moons. The Planetary Society has funded a research project there to learn more about the biology, geology and chemistry of the spring. It’s unique on Earth: waters flow or seep onto the surfaces of glaciers, and elemental sulfur, gypsum, and calcite precipitate from their waters. At the same time, hydrogen sulfide gas is released to the air. The deposits stain the surface of the ice and leave telltale landforms behind. The unusual chemistry, in combination with the extremely cold and dry environment, make these springs an analog for hydrothermal sites beneath ice on Mars and Europa. Pictured: Researcher Stephen Grasby samples sulfur spring discharge at Borup Fiord Pass.
astronauts
equipment
robots
rovers
Science