By Delivering Qubits Alongside Classical Data, Researchers Move Toward Bringing Us a Quantum Internet

Is this the beginning of the quantum Internet? UK researchers have shown that quantum and classical data streams can be... 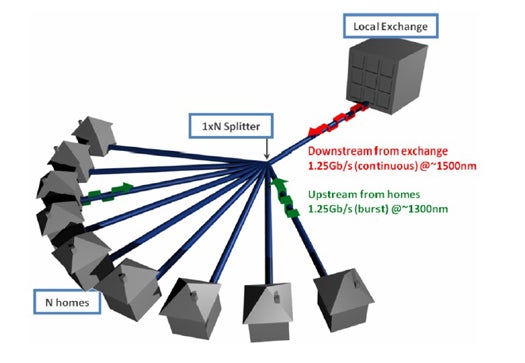 Is this the beginning of the quantum Internet? UK researchers have shown that quantum and classical data streams can be interwoven within traditional fiber optics networks, enabling the distribution of quantum information to the home on existing cable. That means quantum key distribution (QKD) can work alongside traditional, classical data channels, a development that essentially lays the groundwork for a quantum Internet that exists alongside the classical one we have now.

The team, from the Tyndall National Institute at University College Cork in Ireland, has demonstrated in a new paper how qubits–the basic blocks of quantum computing–can travel over standard fiber optics networks. This has been shown before, but not in a real-world kind of way. In other words, you can move qubits over fiber optics in theory, sure. But to feasibly do so–especially alongside traditional data streams–is a huge step forward.

The problem has always been one of interference. Qubits are carried by single photons, while traditional data packets are carried by strong laser pulses. Those pulses flying throughout a network result in spontaneous Raman scattering of photons within the optical fiber, and that in turn interferes with the quantum channels, causing a rate of error that’s high enough to be prohibitive.

So the Cork team figured out how to squeeze the qubits in there in between the Raman scattering. When the pulses of laser light are moving through the optical fiber, the interference pulses along with it–that is, there are quiet moments in between bursts of Raman scattering that lead to interference or crosstalk on the network. By carefully controlling the timing and wavelength of the quantum data, the researchers showed that they could slip quantum data generated by a QKD scheme in between the noise areas, where they can travel untouched by the interference.

All that is key if we’re ever going to practically begin a shift over to widespread quantum computing (first we’ll need some good quantum computers of course, but it never hurts to be prepared). It would be really expensive to build a second quantum network alongside our existing classical data networks. Using this scheme, it appears you could get classical and quantum streams running alongside each another, making quantum IT more commercially viable.