Civil authorities around the world have tried all kinds of tricks to get drivers to slow down: speed bumps, rumble... 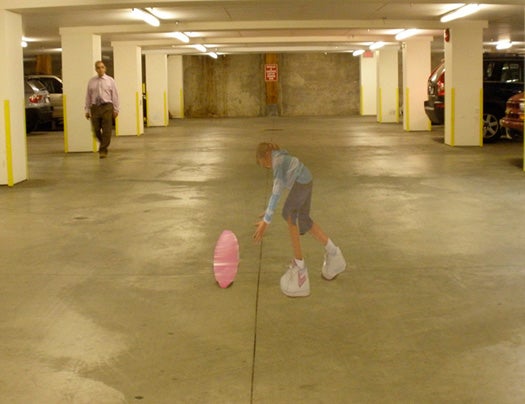 Civil authorities around the world have tried all kinds of tricks to get drivers to slow down: speed bumps, rumble strips, flashing lights, the decoy police cruiser, and of course the good old-fashioned speed trap. The British Columbia Automobile Association Traffic Safety Foundation is taking a different tack: scaring the living hell out of drivers. In an effort to brusquely remind drivers of the consequences of wanton acceleration, they’re painting an elongated image of a child chasing a ball into the street in 2-D on the pavement in such a way that it appears three-dimensional.

The painting, like the one above, is being trialed by authorities in a West Vancouver school zone starting yesterday and will be removed after a week of evaluation. From a distance it appears as more or less a smudge, but at a certain distance the stretched image becomes coherent to the driver and appears to rise from the pavement in 3-D. The faster the car is traveling, the faster the image pops into view. A nearby sign bears a motherly admonition: “You’re probably not expecting kids to run into the road.”

It seems like there’s room for epic backfire here, something that reads in the Vancouver Sun like “Driver Runs Down 11 Schoolchildren on Sidewalk After Swerving to Miss Optical Illusion.” But it is an interesting way to trick drivers into thinking about the ramifications of their driving habits. Right after they pull their hearts out of their throats.