In what sounds like the most over-engineered toilet tech ever, Stanford engineers are using rocket science to clean up sewage.... 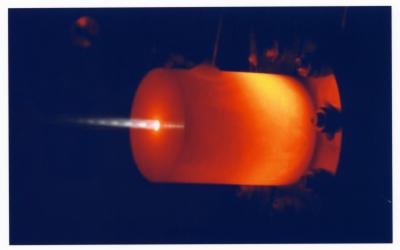 In what sounds like the most over-engineered toilet tech ever, Stanford engineers are using rocket science to clean up sewage.

It’s actually simpler than it sounds — the scientists are developing a system that exploits sewage-loving bacteria to produce nitrous oxide, which can be used up by a rocket thruster. The nitrous-powered rocket’s only byproduct is hot, pure air.

Stanford professor Brian Cantwell specializes in designing rocket thrusters that run on nitrous oxide, also known as laughing gas. He and some of his grad students wanted to use nitrous oxide as an emissions-free energy source. While nitrous oxide is a powerful greenhouse gas, when it’s burned as rocket fuel, the only byproducts are hot oxygen and nitrogen.

As a Stanford release explains, Cantwell teamed up with Craig Criddle, a professor of civil and environmental engineering, who explained that wastewater sludge contains bacteria that naturally convert nitrogen wastes into nitrous oxide.

You have to remove some oxygen to do it, so that nitrous oxide-producing bacteria can thrive. The process also produces excess methane, and the researchers say that gas can be used to power wastewater treatment plants of the future.

Typically, wastewater treatment plants pump oxygen into a roiling mix of raw sewage, to encourage good bacteria to break down organic matter. Nitrogen is one of the byproducts.

But aerating sewage is expensive and difficult; using anaerobic bacteria is cheaper and simpler. The problem has been how to dispose of the nitrous oxide byproduct, which is far worse for the environment than nitrogen. Rocket science is apparently the answer.

Cantwell’s rocket thruster, which was designed for use in spacecraft, can consume the excess nitrous oxide to produce heat. In a Stanford press release, Cantwell says the nitrous oxide can heat an engine to almost 3,000 degrees Fahrenheit and expel nitrogen and oxygen at 5,000 feet per second.

The team says their rocket-sewage system could replace existing wastewater treatment facilities throughout the U.S. and introduce clean water to developing countries. They say it could also be used to recover nitrogen from groundwater beneath fertilized farm fields.