Space is getting pretty crowded — there are a couple thousand satellites orbiting Earth, not to mention destroyed-satellite debris and... 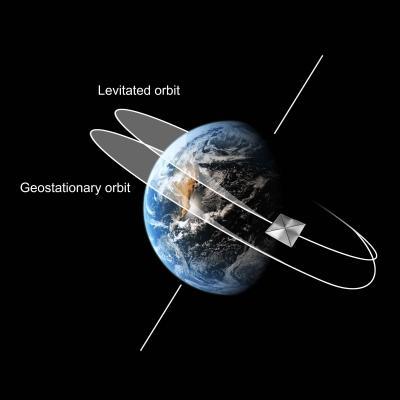 Space is getting pretty crowded — there are a couple thousand satellites orbiting Earth, not to mention destroyed-satellite debris and at least one zombiesat. Adding new ones is increasingly difficult, because there’s only so much room for satellites to sit in specific, geostationary orbits.

A theory first proposed by a physicist/science fiction writer may provide a solution. In a new study, engineers from the University of Strathclyde in Scotland claim to have worked out a system of displaced orbits, first proposed in 1984 by American physicist Robert Forward.

Satellites follow Keplerian motion, an orbital path named for Johannes Kepler, who described it 400 years ago. Unless they are powered, they naturally glide along that path after they’re launched. But Forward — who, as the researchers point out, also spent time in Scotland — proposed using solar sails to nudge geostationary satellites into a different path.

The theory was dismissed as impossible, but now Colin McInnes, Director of the Advanced Space Concepts Laboratory at Strathclyde, and his grad student Shahid Baig have published a paper in the Journal of Guidance, Control and Dynamics that says Forward was right.

McInnes says the team has devised closed orbits that don’t obey Kepler’s laws. The orbits would allow satellites to circle the Earth every 24 hours, but remain displaced north or south of the equator. The pressure from sunlight reflecting off a solar sail can offset the center of the orbit to be slightly behind the Earth, away from the sun, McInnes says. In science fiction-y terms that might make Forward happy, it’s called a levitated orbit.

Though the displacement is between 5 to 30 miles, it’s enough to make room for more geostationary satellites, which are necessary for weather forecasting and communications. Hybrid solar sails could incorporate traditional thrusters to push the satellites even farther apart.

McInnes says he is also working on how to arrange satellites in a polar geostationary orbit, where they could provide new vantage points to study climate change.