Bulletin of Atomic Scientists Turns Back Doomsday Clock, Gives Us An Extra Minute To Live

Good news everyone! Armageddon has been postponed by another 60 seconds. This morning, the Bulletin of Atomic Scientists (BAS) moved... 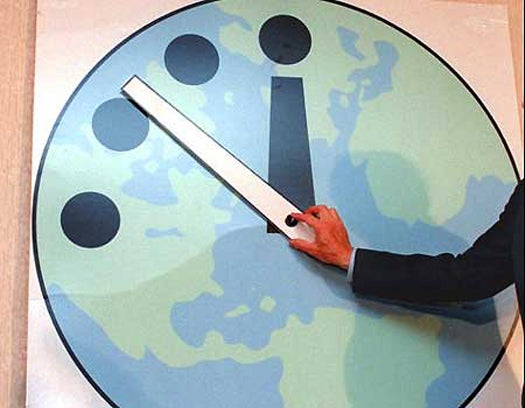 Good news everyone! Armageddon has been postponed by another 60 seconds.

This morning, the Bulletin of Atomic Scientists (BAS) moved the hands of the Doomsday Clock back to six minutes before midnight. The clock is a symbolic timepiece that measures the threat of human extinction due to man-made causes, and recent international action on global warming, combined with cooperation between Russia and the US on nuclear weapon reduction, provided the incentive for the scientists to roll it back a minute.

In a press conference held this morning, the BAS specifically singled out the November 17, 2009 agreement between the US and China on reducing carbon emissions, the April 1, 2009 meeting between Russian President Dmitri Medvedev and Barack Obama on nuclear arms reduction, and indeed the election of Obama in general, as key reasons for the reduction in the threat of annihilation.

This is the first time the BAS has adjusted the clock since 2007, when nuclear tests conducted by North Korea, revelations about Iran’s nuclear program, and discussion by some Bush Administration officials about lowering the threshold for the use of nuclear weapons led scientists to move the clock forward from 11:53 to 11:57.

The BAS was founded by former Manhattan Project scientists looking to atone for their role in the creation of atomic weapons. In 1947, they created the Doomsday Clock to mobilize support against the use of nuclear weapons.

So, what are you going to with your extra time on Earth? This extra minute provides enough time for Usain Bolt run about 600 meters, for Maindrain Pace to steal a car, and for me to get down with my girlfriend one more time.