An interesting report from CNN over the weekend: a tabletop hydrogen fuel cell recharging station could bring hydrogen power to... 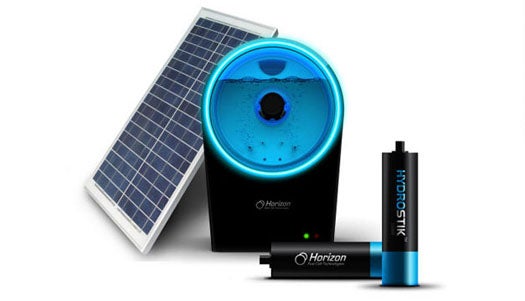 An interesting report from CNN over the weekend: a tabletop hydrogen fuel cell recharging station could bring hydrogen power to the individual home, allowing portable devices and eventually automobiles to charge up on the universe’s most abundant element cleanly from the comfort of home.

Horizon Fuel Cell Technology’s HydroFILL device — which admittedly has an ultra-futuristic look about it — runs on regular old H2O, stripping the oxygen from the hydrogen and packing the latter into removable cartridges at high pressure. However, though the hydrogen is packed in at high pressure, the individual cartridges store it in solid state at lower pressures, making it much safer to carry around and sidestepping a major concern with fuel cell technologies.

If powered from a renewable source, the device essentially enables a carbon free process of powering numerous devices. A UK concern is already developing a Smart Car-like automobile powered by Horizon’s technology. Whether or not the energy concentrations will be enough to propel the concept to success in the near-term remains to be seen, but the idea of creating home-based hydrogen power stations is enticing, as it means we wouldn’t necessarily have to retool our energy infrastructures to enable a clean, efficient hydrogen economy.