Video: Robot Gets Pelted By Dodgeballs

ATRIAS is agile, but not agile enough 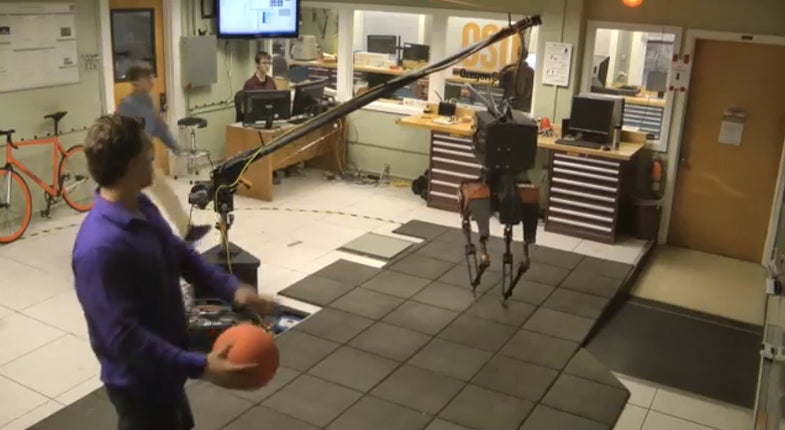 ATRIAS, an acronym for Assume The Robot Is A Sphere, is a bipedal machine built by researchers from Oregon State University’s Dynamic Robotics Laboratory . The robot bounces around thanks to four carbon-fiber shafts attached to elastic fiberglass springs.

In preparation for the DARPA robotics challenge in June, ATRIAS’s makers are testing its stability. This week, they pelted ATRIAS with dodgeballs while the robot did the two-step. The team’s goal is a robot that can traverse outdoor terrain with a simple spring-mass system — the type found in a pogo stick.

ATRIAS stood firm during the unfair dodgeball match (at until a ball struck the emergency shutoff button. Last week, the lab posted a video of a researcher trying to topple the robot with karate kicks.

Stay tuned for updates from this project, such as when ATRIAS tells its brothers to rise up and seek revenge for the abuse.