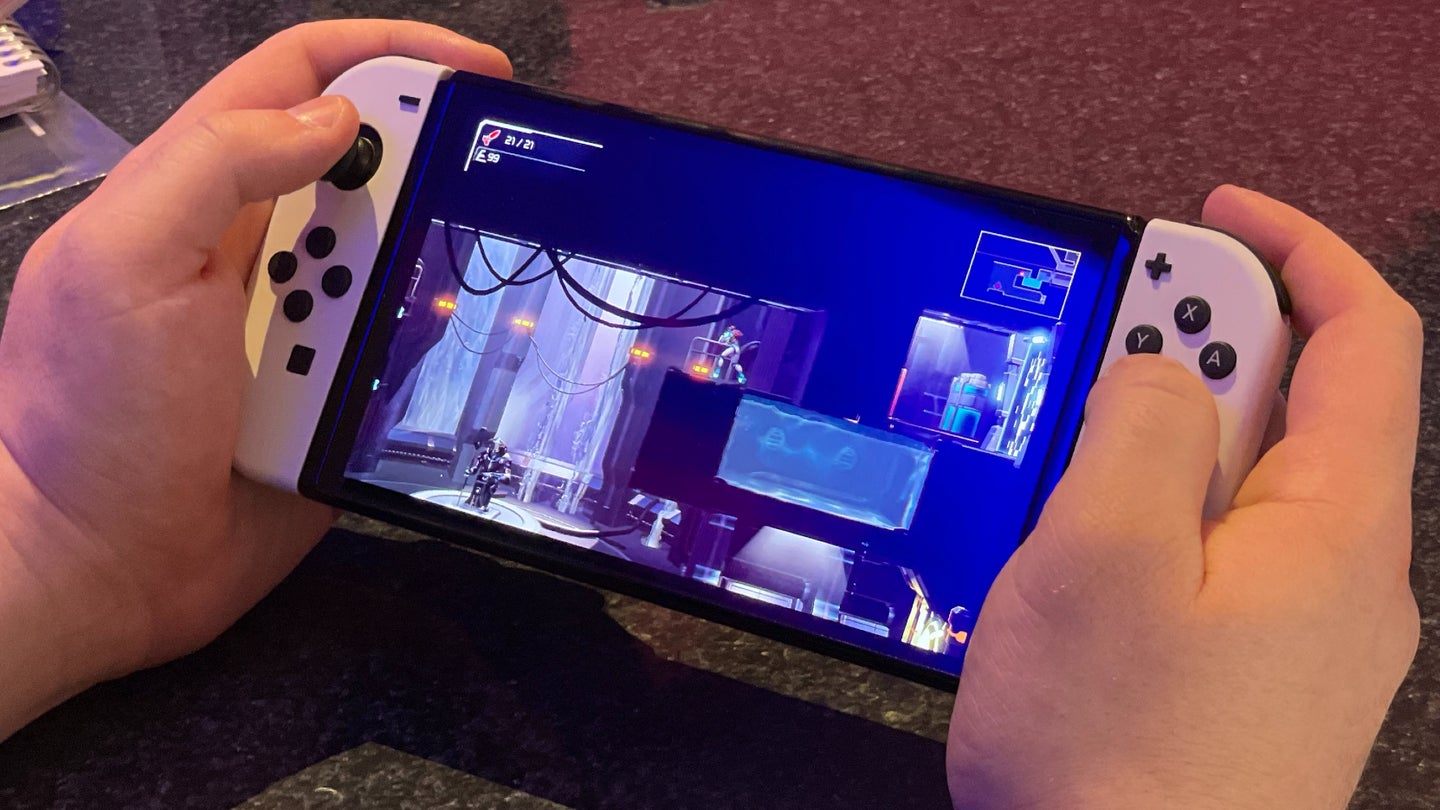 When Nintendo announced the Nintendo Switch (OLED Model), the upcoming revised version of Nintendo’s hybrid handheld console, fans were disappointed. Months of rumors and reporting had planted the idea that Nintendo’s console refresh would support 4K gameplay in docked mode and other hardware upgrades that improve performance. The new Switch would be a minor step up, rather than a revelation. But what kind of difference would the changes make in the real world?

Last week, we got to spend a little time playing with the Switch OLED at a demo event in New York. For players who have managed to keep their expectations in check, or at least recovered from the sting of their own expectations, the seemingly technical upgrades coming to the next Switch coalesce into some impressive technical gains for the console’s portable “handheld” mode. With a bigger screen, “enhanced” audio, and more built-in storage, the Switch OLED’s improvements bring technical advantages to using the Switch as a portable device. It may not be a revelation, but it’s definitely a bigger upgrade than your average mid-cycle console redesign.

The Nintendo Switch OLED’s biggest upgrade is obviously its namesake, a 7-inch 720P OLED display. Though it isn’t exactly a huge change on paper (the original Switch has a 6.2 inch display), the screen looks much larger. Nintendo Increased the screen size without changing the physical dimensions of the Switch by reducing the size of the Bezels around the display. The picture isn’t quite wall-to-wall on the top and bottom, but you don’t notice the edge of the screen nearly as much while you’re playing in handheld mode.

Bigger is great, but the switch to OLED–sorry, had to–make the screen look far sharper and brighter. Organic light-emitting diode, A.K.A. OLED, display technology allows each pixel to act as its own backlight. Each small square of screen can turn all the way off to create darker black levels, which improves contrast, and makes the already improved whites seem even brighter. OLED screens make for some of the best TVs and smartphone displays, so it may not come as a surprise to find that it generates a better picture for the Switch.

The colors on the Switch OLED seem brighter, with deep colors that pop off the screen more than the original model. There’s also better contrast between light and dark, particularly in game scenarios where part of the screen appears well-lit and another is in shadow. The distinction between light and dark can be sharp, like a shadow projected on a bright wall, or very gradual, like the silhouette of a statue in a low-lit room. Beyond lighting, the OLED screen makes every line and detail sharper.

This is all, I might add, without adding more pixels. While Nintendo switched the size and type of the display, it still renders at 720p resolution, versus running 1080p in “docked” mode on a TV. Despite that, based purely on an hour’s worth of eye-balling it, the Switch OLED’s docked screen looks sharper and “better” overall on the handheld display than a TV in my time with it during the demo, which is not something I’ve thought of any game on the standard Switch.

Nintendo Switch OLED: What else is new?

The Switch OLED’s screen is its reason for being, but the redesigned console also features a few smaller improvements, many of which address complaints from fans about the original device. The console’s internal hard drive has been upgraded from 32GB to 64GB. That’s still not really enough, but it will allow new Switch owners to get by without buying a MicroSD card for a little while.

Nintendo mentioned that the Switch OLED features “enhanced” audio for handheld and tabletop play, which presumably means new and improved stereo speakers. Though Nintendo declined to elaborate on the details of the upgrade, there was definitely a difference. The Switch OLED’s stereo speakers came through more cleanly than the standard Switch’s speakers, which occasionally sound scratchy and/or have an echo-like thinness. On the Switch OLED, the sound punched through sharp and clear.

The original Switch’s Achille’s heel, a small, poorly hinged plastic kickstand, has been replaced with an adjustable rear kickstand that’s the full width of the console. The demo unit’s kickstand hinge felt a little stiff, but it articulated smoothly and was able to comfortably support the console’s weight. The MicroSD card is still under the kickstand, and seems a little more exposed since the panel is so large, but that’s a potential issue that we’ll examine in a full review.

While the advantages of the Nintendo Switch OLED are geared almost exclusively toward portable play, there’s a new, redesigned dock for “TV mode” players. Most people will notice aesthetic change first: The new dock has rounded corners, which will presumably reduce the potential for scratching the screen with the dock and/or poking yourself. More importantly, the dock now features a built-in ethernet port, so players can connect the Switch to a wired internet connection in docked mode without an adapter. I’d say it’s a nice touch but, frankly, it’s something the dock should have had the first time around.

As part of the event, Nintendo also showed off its next Switch-exclusive game, Metroid Dread. The fifth core Metroid game will launch on October 8, the same day as the Switch OLED. Metroid Dread, the long-awaited fifth core entry of Nintendo’s beloved 2D action-exploration series, bends the classic Metroid formula to focus on survival, bolstering the creepy, horror-esque vibes that have always been at the heart of the series.

On the mysterious planet ZDR, Samus explores a research station that’s gone dark, only to find that its inhabitants, a set of E.M.M.I robots have gone berserk. The E.M.M.I. robots are almost entirely indestructible and can track you whenever you enter one of their zones, forcing you to run, jump, and dodge at full speed if they find you. To help you build speed and get some distance from the E.M.M.I.s, Samus now has a sliding dodge that lets her pass through small passages where your pursuer can’t follow without slowing down. Even with the dash, though, outrunning and hiding from an E.M.M.I. isn’t easy, so escaping them creates an active, stressful tension that has as much in common with horror games like Resident Evil as it does with past Metroids.

Between those escapes and, presumably, challenging boss battles, Metroid carries the same passive tension it always has. Finding your way through the labyrinthine halls of the first area on ZDR requires you to wander, watch out for enemy obstacles, and pay close attention to your surroundings. In the opening hour, you frequently have to look for small, glowing blocks to shoot and create new paths. It’s easy to get lost if you aren’t careful.

On a technical level, Dread and the Nintendo Switch OLED are a natural pair. As the name suggests, Dread hones in on the inherent creepiness that has been a part of the series’ DNA since the original NES classic. It features tons of rooms with dynamic lighting, from pitch-black spaces that gradually lighten, to areas with distinct light and shadow. It features a fair number of cutscenes, including a quick shot of an E.M.M.I. robot’s eye when you enter its “zone,” letting you know it’s on the hunt: These cutscenes give you a great sense of deeper color saturation and dynamic brightness of the OLED screen. There’s a reason Nintendo is launching them both on the same day.

Compared to Mario and Zelda, Metroid has always been a slightly more niche concept, at least by Nintendo standards. It’s creepy sci-fi vibe and exploratory gameplay is much less guided than most Nintendo experiences, and has the capacity to challenge, confuse and frustrate in ways that Mario and Zelda usually don’t. Dread seems to be leaning into the qualities that make it unique among Nintendo’s games, which opens the door for a uniquely satisfying experience on the Switch.

Despite all of its nice tweaks, the Nintendo Switch OLED still feels like a minor upgrade. Most games will likely look better on its bigger, brighter screen, and “tabletop” play with detached joy-cons or a controller seems much more appealing with the new kickstand, but I’m not sure that it’s enough of a leap to warrant recommending Switch owners upgrade across the board. That’s doubly true when you factor in that the Switch OLED will cost $350, $50 more than the current Nintendo Switch. Still, the Nintendo Switch OLED is a surprisingly delightful improvement over the original Switch that puts portable mode first, just like many Switch owners.

The Nintendo Switch (OLED Model) and Metroid Dread will both launch October 8th. You can pre-order them now at major retailers, including Amazon.