What do refrigeration, DNA synthesis, and Lycra have in common?

They're all getting inducted into the National Inventors Hall of Fame. 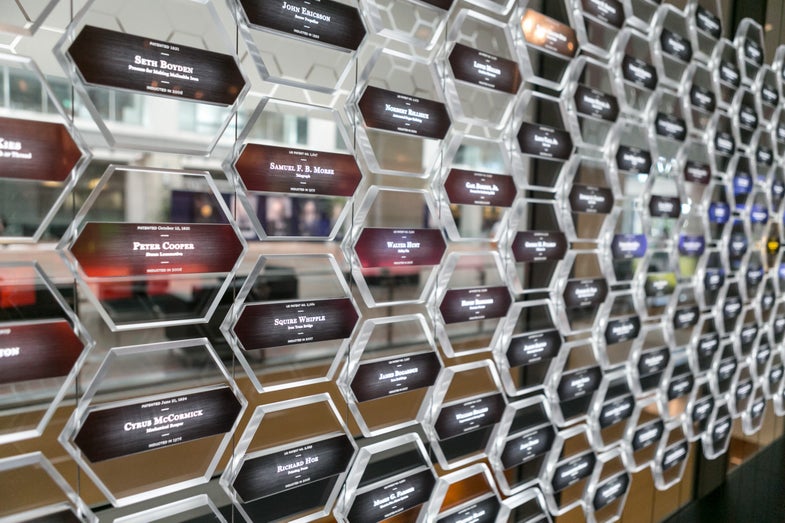 The first-down line that appears on television screens during football games, the tissue-typing test that matches organ donations with compatible recipients, and the OLEDs that light up the screen of the iPhone X—we take technologies like these for granted. This year, however, they’re getting a spotlight: These three innovations, along with nine others, have earned their creators a spot in the National Inventors Hall of Fame.

Since 1973, when it inducted Thomas Edison, the Hall of Fame has operated as an outreach program for the U.S. Patent and Trademark Office (USPTO). It began as a way to highlight U.S. patents that have significantly impacted society, and has developed over the years to add educational programs that encourage aspiring inventors.

“It’s inspiring to meet the inductees—they’re true, real-life role models,” says Rini Paiva, Vice President for Selection & Recognition at the National Inventors Hall of Fame. “In many cases, people who read about their stories are instilled with the desire to do the same kind of great things.”

To find those motivational stories, the Hall of Fame searches for inventors and accepts nominations, via their website, throughout the year. Although nominees can be anyone, living or dead, from any country—the Hall of Fame loves inspiring immigrant stories—they must have a U.S. patent. After all, the Hall of Fame exists to bring attention to the power of patents.

“Our patent system is 230 years old,” says Michael Oister, CEO of the National Inventors Hall of Fame. “We are by far the longest-tenured intellectual property economy.” In other words, Paiva says, “It’s an integral part of American history.”

Sure enough, you can find the roots of the USPTO in the U.S. Constitution, which gives Congress the power “To promote the Progress of Science and useful Arts, by securing for limited Times to Authors and Inventors the exclusive Right to their respective Writings and Discoveries.” But patent buffs like Paiva and Oister worry that younger Americans are unfamiliar with these enshrined rules of intellectual property, and that the inability to claim credit—and profit—for their work could stifle budding inventors’ creativity.

Hence the Hall of Fame. Each year, a selection committee judges the impact that the nominees have had on society and the economy. Based on this, they narrow down the list, eventually choosing six to 10 living and four to six posthumous inductees.

“They’re the silent giants of science and invention technology,” Oister says, “and with a few exceptions, nobody knows who they are.” He hopes to change that by honoring these inventors at the Hall of Fame’s annual induction ceremony in May.

Here are some of the achievements from the class of 2018. You can read more about them at the National Inventors Hall of Fame website. 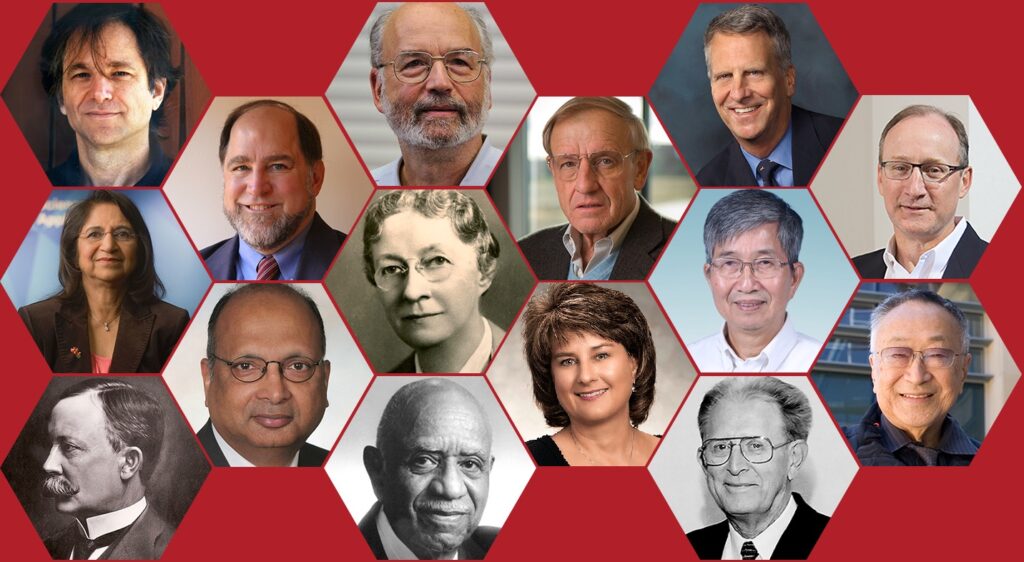 For more information on the 2018 inductees, check out the National Inventors Hall of Fame website.

In 1985, biochemist Marvin Caruthers, along with other researchers at the University of Colorado – Boulder published a summary of his work on the chemical creation of DNA. The ability to rapidly synthesize these molecules transformed DNA from a specialized field of research into the basis for the modern biotechnology industry.

While watching a football game on television, nobody wonders about the first-down line. But the 1st & 10 system behind that graphic owes its existence to sailor and businessman Stan Honey. In addition to football broadcasts, Honey has provided visual tweaks to baseball, NASCAR, and other sports.

Nanoparticles for your teeth

Dental technology has come a long way since the good old times when barbers yoinked teeth without giving patients the benefit of anesthesia. These days, researchers like Sumita Mitra, a scientist at manufacturing company 3M, have developed advanced materials—specifically, a filling material that incorporates nanoparticles—to help dentists keep your pearly white pearly and white. Mitra’s invention, which has contributed to the restoration of 600 million mouths, is stronger and looks more tooth-like than other dental composites.

Enjoying the crisp images on the screen of the iPhone X? You can thank Ching Wan Tang and Steven A. Van Slyke, the chemists who created organic light-emitting diode, or OLED, technology. OLEDs light up the individual pixels of an image, creating better contrast and sucking up less power than other screens. In addition to iPhones, you can find this type of display in computers and smart televisions.

Scientist and surgeon Paul Terasaki didn’t invent organ transplantation. But without his tissue-typing test, which determines whether a donated organ will be compatible with an intended recipient, doctors couldn’t provide hearts, lungs, and other organs for those who need them. Terasaki (deceased) also created other innovations in the field of kidney transplantation, such as developing a cold-storage system and establishing a transplant registry.

Chlorinated solvents are great at scrubbing fatty grime like oils and waxes off metal, which is why the space program relied on these substances during its early days. Unfortunately, they’re also potential carcinogens that have contaminated many waterways. To clean them up, NASA engineer Jacqueline Quinn helped develop emulsified zero-valent iron, a material that quickly pulls environmental contaminants—such as chlorinated solvents—out of groundwater.

If you regularly hit the gym, odds are you own at least one item of Spandex clothing. Chemist Joseph Shivers (deceased) developed the stretchy fiber, which carries the brand name Lycra, at DuPont in the 1950s. In addition to keeping you covered during an energetic workout, the material has found its way into cars, furniture, and other applications.

When you get too hot or too cold, you can throw another log on the fire or crank down the radiator. Or, if you’ve benefitted from the work of professor Warren S. Johnson (deceased), you can simply adjust your thermostat to reach exactly the right temperature. His system, designed to regulate individual classrooms’ climates, has found its way into just about every commercial building you’ve ever visited.

In the first half of the 20th century, Americans developed a taste for foods shipped from distant locations. As laboratory chief at at the Food and Drug Administration, chemist and refrigeration engineer Mary Engle Pennington (deceased) needed to make sure that these perishables remained safe to eat even after transportation and prolonged storage. By studying how refrigeration affects the freshness of food, she literally saved lives and influenced the way we still handle food today.

If buying something on Amazon could compromise your credit card, you’d stop shopping on the internet. But by securing online communication, the public-key encoding method called RSA cryptography has made just about every online purchase possible. Yes, that means you can go ahead and blame its developers—Ronald Rivest, Adi Shamir, and Leonard Adleman—for your latest online shopping spree.

Speaking of the internet, to read this article, you’ve probably connected to a Wi-Fi or 4G network. These fast connections both rely on Multiple-Input Multiple-Output (MIMO) technology, developed by electrical engineer Arogyaswami Paulraj. With this method, multiple antennas send and receive information, allowing a network to transmit data faster and over a larger area.

Paulraj isn’t the only antenna innovator on this list. Engineer Howard S. Jones Jr. (deceased) created the flat, light arrays known as conformal antennas. Their shape allows them to fit on streamlined devices, such as rockets and missiles, without creating drag or adding extra weight. This breakthrough had a major impact on both the U.S. space program and today’s defense systems.