Nasty Parasite Made Nastier By Virus Living In It 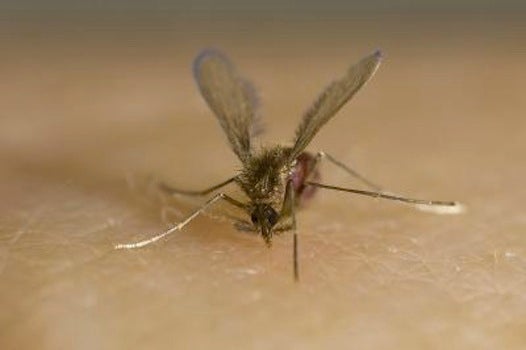 This is a sand fly, an insect which spreads leishmaniasis. Rod Dillon
SHARE

The disease leishmaniasis affects about 12 million people per year, at best causing unsightly skin sores, and at worst causing the organs to fail and the patient to die. Researchers already know that leishmaniasis is caused by the leishmania parasite, and enters the human bloodstream through bites by infected sandflies. But they recently uncovered an additional infectious culprit: a virus living inside the leishmania parasite. That could explain why treatments for some kinds of leishmaniasis aren’t as effective as they could be, and could help researchers create new and better ways to combat the disease.

The researchers believe that once the parasite multiplies in the body, it unleashes the virus that was within it, which then affects the host cell and causes disease. Viruses infecting parasites are not uncommon, but there are very few cases in which the virus can then in turn affect a host. One of the researchers compared it to a Russian doll in an article in New Scientist.

Leishmaniasis infects people in South Asia, Latin America, and parts of Africa. Depending on the region, the treatment failure rate varies—in Latin America, about 40 percent of people infected will relapse, and in South Asia it could be more like 70 percent. Researchers had assumed this was because the parasite becomes immune to the drugs used to treat the disease, but they weren’t sure.

Two studies recently published in The Journal of Infectious Diseases found this not to be true. Each study focused on a different parasite (the Leishmania braziliensis and Leishmania guyanensis, both found in the Amazon basin of Peru and Bolivia). When the researchers isolated the parasites in infected patients, they found that the parasites were not in fact resistant to the drugs that treat them. But they did find strands of a virus dubbed LRV1. The virus was only present in some of the parasites, not all. When the virus was present, it changed how leishmaniasis responded to treatment; about half the patients with the virus relapsed after treatment, whereas only a quarter of patients without the virus saw the disease return.

This virus could provide a new target for leishmaniasis treatment. But before they can get there, researchers first have to understand LRV1 better, and figure out how the virus affects the parasite.