Artful Dodger, with Eyes on the Prize 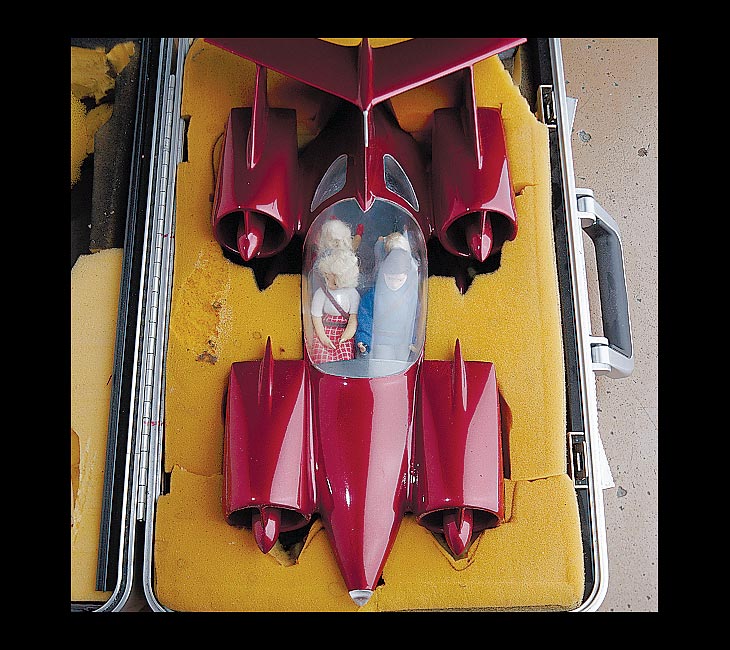 A model of the Skycar, for speaking engagements and investor presentations, shows the concept: eight 150hp rotary engines powering four ducted fans, which pitch up for vertical flight.

Last August one of the longest-anticipated feats of flight since the moon landing took place in a grassy field in Davis, California. As a small crowd looked on, a red Batmobile-like vehicle shuddered, lurched, and rose a few feet into the air, its eight 150hp rotary engines screaming like hornets. After a few minutes, the craft settled to the ground.

The event might not have seemed like much–it could hardly even be called a flight–but it represented a milestone that inventor Paul Moller, a 67-year-old Canadian, had been promising journalists and investors for more than a decade. In 1991, when he introduced a mock-up of the vehicle, the Moller M400 Skycar, Moller declared that it would fly within a year or so. Although the Skycar has finally gotten off the ground, it hasn’t lived up to its promised capabilities, such as the ability to carry four people safely and efficiently at speeds of up to 375 mph. Nor has another of Moller’s claims come true: that 10,000 Skycars would be buzzing the airways by the end of 2002.

The Skycar, with a lightweight fiber-reinforced plastic body, flies on four ducted fans. Moller chose this configuration, as did Melkuti, because ducted fans produce significantly more thrust than free propellers of the same size. They were used in several experimental vertical-takeoff aircraft built during the 1950s and ’60s, including the Ryan XV-5A Vertifan, a single-engine jet with fans embedded in its wings. But as with other such attempts, the Vertifan performed poorly, plagued by excess weight and sluggish control response. “Ducted fans normally don’t work very well,” Hollmann explains. “The problem is that you need a lot of horsepower. If you double the diameter of a rotor, it’s like doubling the horsepower. That’s why helicopters have long rotors.”

Another drawback of ducted-fan aircraft is that if they lose power, they can’t autorotate like helicopters–which rely on the fact that a free-spinning, though unpowered, rotor still produces lift and stability. Instead, ducted fans fall like bricks. The two Ryan XV-5As that were built both crashed, killing their pilots.

Forecast: Stormy
Buyer beware. In 2003 the U.S. Securities and Exchange Commission filed suit against Moller International in federal court for selling unregistered securities. The suit alleged that while Moller, who has been designing and building vertical-lift vehicles since the early 1960s, had touted the Skycar’s promise to investors, “in reality, the Skycar was and still is a very early developmental-stage prototype that has no meaningful flight testing, proof of aeronautical feasibility, or proven commercial viability.” The SEC also alleged that Moller misled investors about the firm’s financial prospects. Moller paid $50,000 to settle the suit.

Click here to see a marketing tool that Moller uses to lure in investors into this project.