The Car That Repairs Itself

Two materials currently under development--self-healing composites and "bubbloy"--could be the key to creating auto bodies that regenerate after an accident. 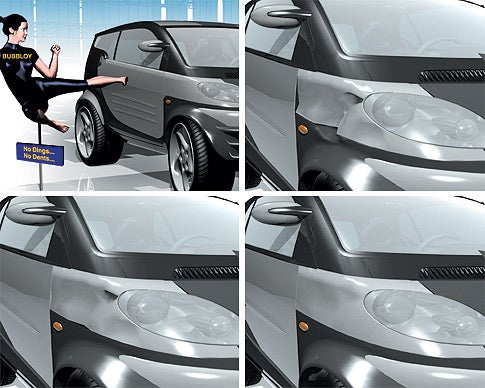 Quick Fix and Get your Kicks

_Microcapsules embedded in the carbon-fiber composite break open and dump a liquid “healing agent” into a crack as soon as it forms due to standard wear and tear. Catalyst microparticles react with the agent, and it hardens, sealing the crack. Researchers project that a composite car body possessing these chemical elements could retain 90 percent of its original strength, which would significantly lengthen its life span. To protect against more energetic abuse, say an enthusiastic whack from a karate blackbelt, superflexible, springy “bubbloy” absorbs the energy of the impact by crumpling up. After the impact, the bubbloy pops right back into its original shape. The alloy–a mixture of palladium, nickel, copper and phosphorus that’s fairly lightweight and can be squished like a red rubber ball–was developed at Caltech._

It’s a shame how easily cars get dented. All it takes is a runaway shopping cart or a reckless jerk pulling into an adjacent parking spot. Why not make them from carbon-fiber composites, which are stronger, stiffer and lighter than steel? Because such composites have a serious shortcoming: They break with little or no warning. Over time, tiny cracks form due to the cumulative insults of vibration, impacts and thermal cycling. Eventually the microcracks (difficult to detect because they often form under the surface) create large cracks, leading to sudden, catastrophic failure. No one wants a car that shatters after driving over a speed bump.

But what if composite materials could repair themselves the way the human body attends to its own injuries? That’s the question Scott White asked himself when he first thought of self-healing structural composites. “Your body heals itself continuously over your lifetime,” says White, a professor at the University of Illinois Urbanaâ€ Champaign. If you get a cut or bruise, the repair process begins automatically. The local effects of the cut itself send a signal to nearby platelet cells and white blood cells to get to work. “We liked that idea–healing cracks as they form,” White says.

The material White’s team developed contains millions of liquid-filled microcapsules. When a crack forms, the shells of the microcapsules (which measure roughly 1/250 of an inch) rupture, releasing the liquid “healing agent” dicyclopentadiene (DCPD), which is a polymer precursor. Capillary action draws the liquid into the fissure, where it comes into contact with embedded catalyst particles, causing the liquid to harden in a matter of minutes. By catching and patching the cracks while they’re still tiny, a car’s body could retain up to 90 percent of its original strength, extending its life span considerably.

Of course, once all the capsules have been broken, the material can no longer heal itself. White’s solution is to make the material even more like a living creature. “We’re getting closer to the biological model. People have a highly developed circulatory model that transports not only the building blocks for regeneration and healing but also nutrients and everything else in your body.” White’s research team is working on a fabrication technique to make materials with circulatory networks embedded within them. “At that point we could replenish the supply of healing agents indefinitely throughout the lifetime of that material or structure, and that would involve a â€heart’ to pump the fluids around the network and a â€gas’ tank you’d fill up periodically with a supply of healing agent.”

While self-healing composites could provide years of crack-free driving, they won’t be able to repair damage incurred in a serious collision. That’s where “bubbloy” (from “bubble” and “alloy”) could come into play. Developed in Caltech’s materials science lab, bubbloy is made from a frothy mixture of palladium, nickel, copper and phosphorus. You can hit a bubbloy fender with a hammer and it’ll pop back to its original shape. Doctoral candidate Chris Veazey, who created the material with fellow Caltech student Greg Welsh, says, “We think it might be especially useful for the crumple zone of a car. It should make a car safer.” Demolition derbies will never be the same.