A lucky eBay bidder could walk away with a one-of-a-kind Skycar prototype. Starting bid? Just $1 million 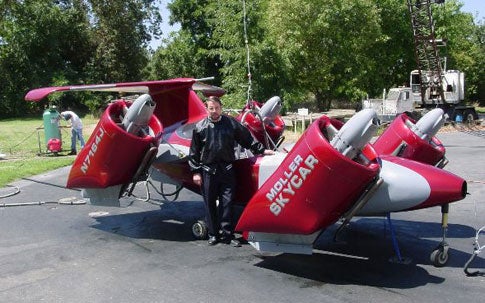 Last year, the Skycar was offered for sale on the cover of Neiman Marcus’s famed annual holiday catalogue. No buyers. Now it’s on eBay. What’s next, collect 340 million Pepsi bottle caps, and it’s yours?

Today Davis, Californiaâ€based Moller International placed on the eBay block its M400X Skycar prototype, a concept aircraft powered by four ducted-fan engines that is also intended to be driven on public roads. The company wants to attract a buyer willing to part with $4 million or so to own what creator Paul Moller is hoping will one day be a piece of aviation history.

The particular model up for sale is an unflyable, undriveable prototype-essentially a museum piece. Moller is developing a follow-up to the M400 for more advanced tests and is continuing to eagerly accept deposits for future production versions of the car. He´s also in worldwide negotiations with potential distributors.

Although Moller’s vision of a practical flying car is undoubtedly appealing (the Skycar has been featured on countless TV programs and magazine covers, including Popular Science), his efforts have amounted to very little since he began developing it in 1983. Several spin-off technologies, among them an innovative rotary engine, have proven successful and helped fund the research, but the aircraft has made no significant test flights, apart from a few tethered hover tests.
Says Bill Sweetman, PopSci‘s aerospace analyst, “There are two proven ways of getting an airplane to take off vertically: Move a lot of air slowly like a helicopter, or move a little air fast like a Harrier jump jet, which is basically a small fighter wrapped around a huge jet engine. Moller is trying to use relatively small lift fans with small engines and hasn’t yet shown that it works well enough to do the job. It would also inspire more confidence if the Skycar actually had wings.”