What's the difference between the F-35 Joint Strike Fighter and the F-22 Raptor? 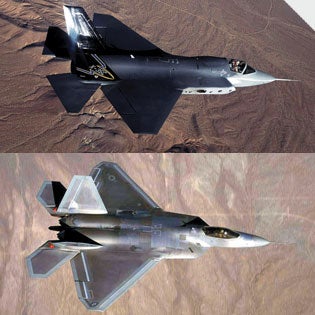 I’ve noticed that the F-35 Joint Strike Fighter and the F-22 Raptor, both of which are in development by Lockheed Martin, look strikingly similar. What’s the difference between the two?

The two aircraft are indeed difficult to tell apart, because they share similar wing and tail designs, as well as distinctive engine inlets beneath the cockpit. The differences are in capabilities, performance and materials.
The F-22 Raptor, designed for the United States Air Force, is a twin-engine fighter intended primarily for
air-to-air combat but also capable of attacking ground targets. It will be the stealthiest aircraft ever; thanks to new low-radar-observable designs and materials, engineers were able to lose the all-black, oddly shaped configurations of the F-117 Stealth Fighter and B-2 Bomber in favor of a more conventional design.

The Raptor, which should enter service in 2005, also features supercruise, the ability to sustain supersonic flight without the use of fuel-gulping afterburners.

The Joint Strike Fighter, meanwhile, is being developed in three
different versions — for the Air Force, Navy and Marines. Expected to debut in 2009, it’s a single-engine aircraft that is optimized for ground attack. (The Marine Corps’ version will have vertical-lift capability, so it will be
able to take off and land in extremely tight spaces.)

Another key difference: cost. The Joint Strike Fighter has a $35 million price tag, while the faster, stealthier Raptor will set the Air Force back $120 million apiece. In combat, though, the two won’t be so far apart. Future scenarios envision them working in tandem: The Raptor will knock down the door — taking out air defenses and radar sites — and then the Joint Strike Fighter will launch strikes against ground targets.