NASA’s New Base Uses Smart Spaceship Tech on the Ground 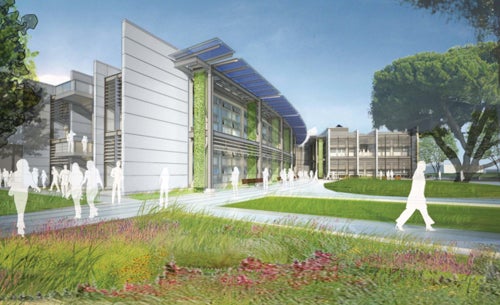 Smart systems and a central computer will keep track of even individual energy efficiency in NASA’s Sustainability Base. Don’t anger the computer.

Get ready for the greenest federal building ever built, and maybe also the smartest. NASA plans to channel decades of space exploration technology into its upcoming Sustainability Base in California.

The U.S. space agency will draw on sensor technologies developed for space exploration to build its eco-friendly smart building. Groundbreaking is scheduled for August 25, 2009 at the NASA Ames Research Center in California.

A central computer will draw on weather forecasts and a dynamic web of sensors to figure out the right settings for the building’s automated environmental controls, and even adjust to changing sunlight, wind, and temperature conditions. SPACE.com reports that the computer will also plan heating and cooling around how many people are in various rooms or meetings, based on each worker’s electronic calendar.

The ever-watchful computer would even encourage the human occupants to boost their energy efficiency, by constantly providing reminders on building inhabitants’ individual laptops.

That would likely go a long way toward NASA’s goal of having a zero net energy consumption building, with less than 10 percent of the water consumption of comparably sized buildings. The building design aims for a platinum rating under the Leadership in Energy and Environmental Design (LEED) green building standards.

Cooling panels and 72 geothermal wells to route naturally cooled water will substitute for air conditioning in the California heat. The central computer might also opt to crack open the windows if it detects a nighttime breeze.

If NASA can manage this type of smart environmental control on Earth, it’s easy to imagine a similar setup for the inner environmental systems of future manned spacecraft, not to mention bases on the moon, Mars, and beyond. Just don’t name the central computer HAL.