For a while now, NASA has been planning to use a nuclear fission reactor to power future bases on the... 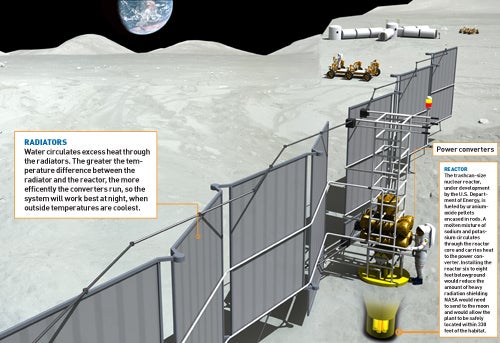 For a while now, NASA has been planning to use a nuclear fission reactor to power future bases on the Moon and Mars. They have now finally begun testing a Stirling engine-based system, subjecting it to simulated extraterrestrial conditions to examine how it would fare as a lunar power generator.

The fission reactor uses a sodium-potassium liquid metal mixture to transfer heat to a Stirling engine, which then uses gas pressure for electricity conversion. Testing has been successful so far, as researchers have been able to generate a constant 2.3 kilowatts of power from the engine, using a non-nuclear heat source. With the full nuclear reactor running, their goal is to produce 40 kilowatts of power.

To simulate real space conditions, NASA has tested the motor in conditions of high radiation (20 times greater than normal), to make sure the parts don’t break down when exposed to nuclear materials. They’ve also tested the lightweight radiator panel in a vacuum chamber to make sure it can handle the lack of atmosphere on the moon, as well as the extreme temperatures of +/-100 degrees Celsius. They also bombarded the thing with dust, to make sure it can handle the physical lunar environment.

In all tests, the parts performed better than expected, and researchers believe these systems can last upwards of 8 years without maintenance. Now if NASA can just get over their apparent lack of budget for manned missions to the Moon and Mars.