Strongest Evidence Yet that Saturn’s Moon Has Liquid Water 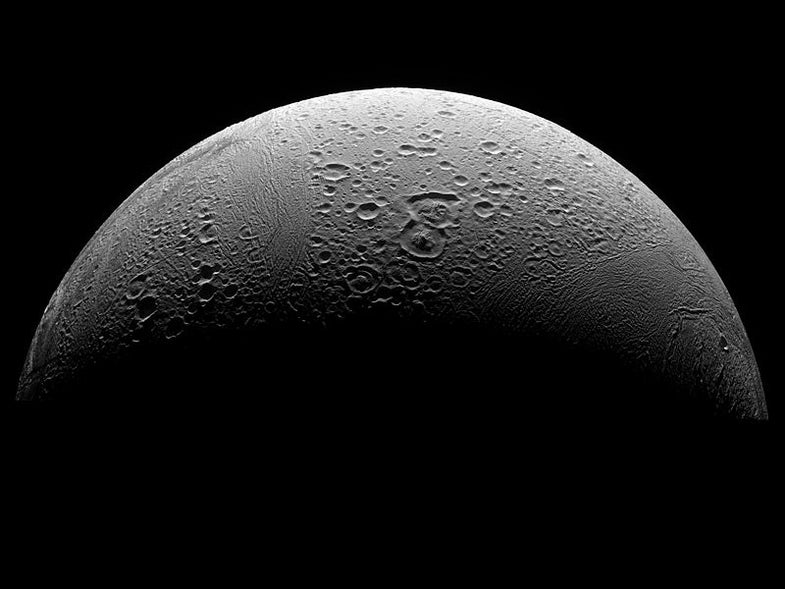 This week, new photos of our moon taken by NASA’s Lunar Reconnaissance Orbiter showed what we already know: the orbiting rock has a lot of craters, but no signs of life. But scientists at the Max Planck Institute for Nuclear Physics in Heidelberg, Germany have revealed new findings that there is another moon worthy of intensive exploration — and perhaps even a visit at some future date.

In 2005, scientists found the first signs that Saturn’s moon Enceladus might have a salty ocean beneath its icy outer shell. New evidence — based on analysis by the NASA Cassini spacecraft, currently passing near Saturn — reveals a high level of a sodium compound that could indicate the presence of water.

There are other indications of water on Saturn’s moon as well. Jet streams that shoot into space from the moon create plumes that only an underground reservoir, or pockets of ice on the planet surface, could create. The Cassini craft will make another pass this fall for a closer look at the 300-mile surface of the moon. If there are more signs of water, scientists could upgrade Enceladus to a status on par with the moons orbiting Jupiter, several of which may house water reservoirs.