Developing Lasers for the Battlefield

They're not just for the dancefloor any more 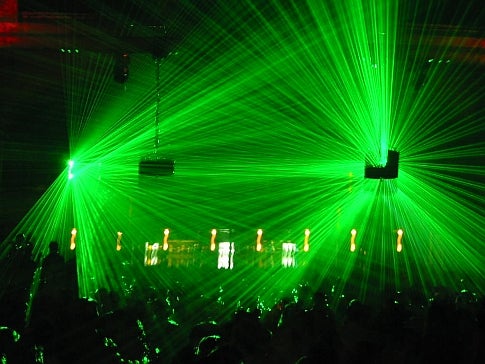 Laser weaponry is a hot topic lately (excuse the pun), especially for those who question the ethics of using them on the battlefield. In late September, the Senate approved a Defense Authorization Bill that would provide new funding for military laser weapons.

So called “directed-energy weapons” use a beam of coherent light to disable attacking troops. According to the Senate Armed Services Committee, of which presidential hopeful John McCain is a member, laser weapons provide a tactical advantage primarily because of their accuracy. In the future, these weapons could be used during combat as a defensive measure, but it’s still unclear whether the Department of Defense will decide to develop them as offensive weapons.

A “shoot-down” test from a 747 is planned for the end of 2009. If the test shows that laser weaponry has potential, an additional $30 million in funding will be allocated to develop a missile defense program.

Today, low-power laser weapons are being used in Iraq to “incapacitate” enemies or “deter” vehicles from approaching checkpoints. (The Department of Defense did not immediately return our requests for information about the new funding for laser weaponry.) Similar to a Taser weapon, low-power lasers cause disorientation or temporary blindness.

In August, Boeing announced that the U.S. Army had awarded the company a $36-million-dollar contract to develop a high-powered laser weapon. The Geneva Convention specifically prohibits the use of lasers in combat, but the truck-mounted weapon under development — called a Heavy Expanded Mobility Tactical Truck — would be used as a defensive measure, capable of shooting down rockets, artillery shells, and mortar rounds. The vehicle will use a solid-state laser system (solid-state lasers are also used in computer semiconductors), which is more efficient and accurate than standard laser weapons.

Lasers are currently used on the battlefield for targeting and tagging enemy units. For example, the LDART (Laser Detection and Reciprocal Targeting) system can read whether a vehicle has been “painted” by a laser, and warn troops of impending threats. Lasers are also used for missile guidance and to determine the range of objects on the battlefield as a guide in troop advancement.