Brought to you through the magic of prehistoric fan-fiction 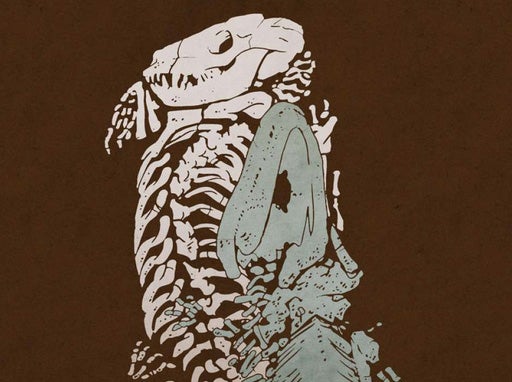 Finding the fossilized remains of two different species entombed in the same burrow is the discovery of a lifetime. It’s one of those perfect examples of how science can spark the imagination, and leave us searching for more. Science at its most beautiful always has us asking more questions than it answers.

I see this spark every time I explain the story behind the comic, regardless of age or background. How did they meet? What were they doing? Here you had two creatures from very different eras of life on Earth—the broomistega, an old world amphibian with eyes on top of its head, and the thrinaxodon, an early mammal-like lizard with differentiated teeth and possibly even whiskers. It’s impossible not to wonder what sort of circumstances brought them together. The current thought is that the broomistega ran into the burrow to find shelter, unaware of the estivating* thrinaxodon inside. They were probably killed shortly after when flood waters filled the burrow with sediment. But according to Vincent Fernandez, the lead author on the paper that inspired the comic, this never stops people from imagining alternative narratives:

“Of course the most common story is related to some sort of inter-species forbidden love like Romeo and Juliet. They hide in the burrow to express their love.”

I’m certainly plenty guilty of injecting artistic license into their lives, but at the same time, the book presented itself with a multitude of ways to teach readers about what life was like back then. Much like the story’s protagonists embodied the old and the new, the early Triassic was at once a time of great death, as well as one of new life. Each turn in the story was a new opportunity to illuminate a tiny sliver of our lost history.

Back in May, I was jetting around Canada premiering the newly remastered OTP book. If you missed me up north or if you’re new to the series, never fear. You can read the introduction below, and the mini itself is available for purchase here.

* A state of dormancy not unlike hibernation.