Watch The F-35B Hover To A Landing On A Ship

Pretty cool, even with the hefty price tag 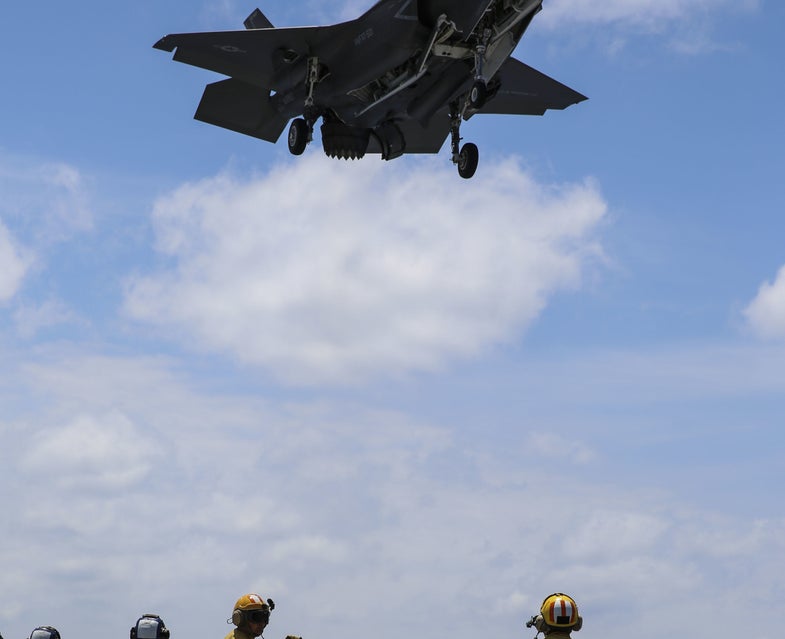 An F-35B Lightning II hovers over the flight deck of USS Wasp (LHD-1) before landing during routine daylight operations, a part of Operational Testing 1, May 22. OT-1 is serving the purpose of evaluating the full spectrum of F-35B measures of suitability and effectiveness, as well as assessing the integration of the aircraft into the spectrum of flight operations. The F-35B is with Marine Fighter Attack Training Squadron 501, Marine Aircraft Group 31, 2nd Marine Aircraft Wing. (Marine Corps photo by Cpl. Anne K. Henry/RELEASED).
SHARE

Clocking in at just $134 million per plane, the F-35B fighter jet is the most expensive sibling in its long-troubled family. The F-35s have been plagued for years with frustrations, cost overruns, and developmental difficulties. Designed to share parts with its Air Force and Navy brethren (the F-35A and F-35C, respectively), the F-35B also has the difficult task of replacing the U.S. Marine Corps’ venerable Harrier Jump Jets. In order to fill those jumping shoes, it has to successfully take off in a short distance and land vertically. At operation trials over the past week on the USS Wasp, the F-35B demonstrated just that: for more than one hundred million dollars a plane, it can at least do what it promised.

The F-35B hovers by blasting a ton of exhaust downward, using the force of the air to support itself as it settles down onto the landing deck of a small ship. This process produces so much heat that it melted the ship’s deck during tests in 2011, but that appears to no longer be a problem. At 844 feet long, the USS Wasp is a bit shorter than the standard American 1,092-foot aircraft carrier. Classified as an “amphibious assault ship,” the Wasp needs special fighter jets to work from such a short runway, and it helps if they can just hover into a landing.

Operational testing, which is actually a fairly advanced stage in the testing process, began last week. Between May 18th and May 26th, the Marines flew 80 sorties from the Wasp using six F-35s. Not bad, but again, sort of what we should expect with a price tag of $134 million a plane. This is important for the F-35’s export potential; during testing, personnel with the UK’s Royal Navy and Royal Air Force were on the Wasp to watch and learn how the plane actually works at sea.

As optimistic as reports coming from the deck of the Wasp are, there are still likely some challenges ahead for the plane. A report by the Government Accountability Office on the F-35 that was published in April notes:

Still, it’s nice to at least see the plane fly as it should. Watch it in action on the deck of the USS Wasp below: