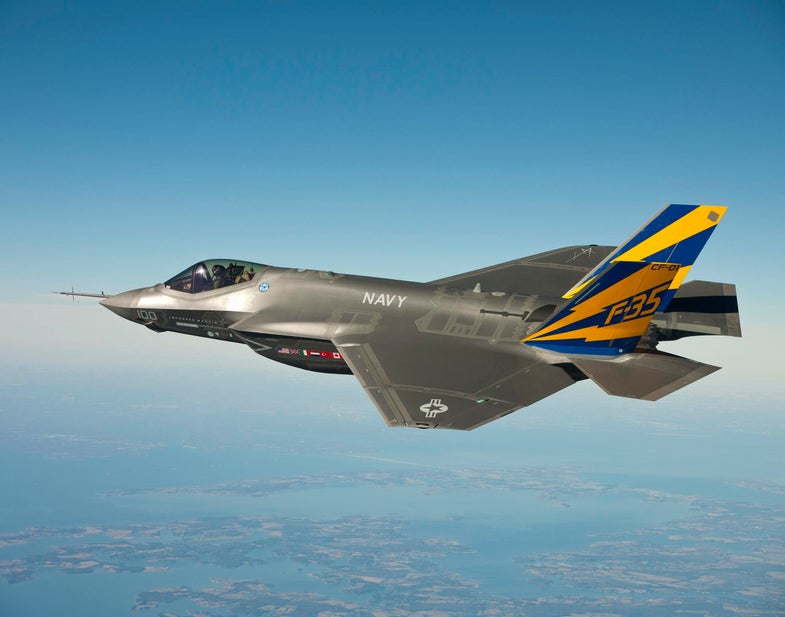 Lockheed Martin’s F-35 Joint Strike Fighter is, for better or worse, the future of American military airplanes. With Air Force, Navy, and Marine Corps versions costing over $100 million each, the aircraft is a jack-of-some-trades designed to replace 10 older models now in use by America and its allies. The F-35 has a lot of very different-sized shoes to fill, including one in a cyberwarfare, so it’s going to do something new: carry a “cyberpod” cyberweapon.

Like many new weapons systems, the cyberpod is cloaked in secrecy. Rear Admiral Randy Mahr, a program director on the F-35, told IHS Jane’s that “industry is developing a pod that would not degrade the signature of the airplane.” Translation: The cyberpod is probably an external weapon that won’t make the F-35 any less stealthy than it is now.

Cyber-attack is a broad category that encompasses everything from jamming signals to destroying laboratory equipment (i.e. centrifuges to refine weapons-grade nuclear materials) with malicious code. The common thread is that all cyber attacks target computers in some form or another.

We don’t yet know what the F-35’s cyberpod will do. But in 2010 the U.S. Navy revealed a goal develop its existing cyberweapon technologies into a “Next Generation Jammer.” Made by Raytheon, the jammer fools hostile radar systems by receiving those signals, then sending back false ones directly to the source. Fast-forward five years, and it’s almost certain the jammer has evolved–and that the cyberpod could do more than any jamming devices currently carried by naval aircraft. If not, what’s the cyberpoint?