Make Your SmartPlate Count Calories For You 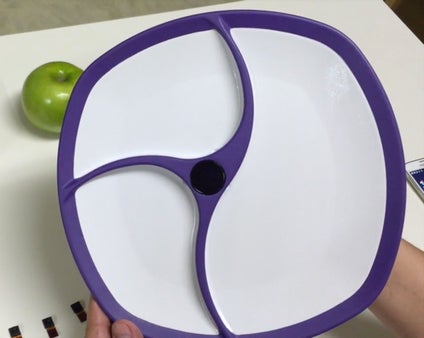 Calorie counting has been helped a lot by the sharp uptick in personal technology, and one team wants to make the process even easier by swapping out your ordinary china with its new SmartPlate.

The SmartPlate has three different partitions, making it look a bit like those divided plates you use for barbecues or breakfast buffets. But hidden in the walls of those partitions is the key to SmartPlate’s capabilities: three small digital cameras that use object recognition algorithms to identify the food placed in each section. Combined with weight sensors, SmartPlate can query an online database and figure out how many calories and other nutrients are in the food that you’ve placed on your plate, all in a matter of seconds. The object recognition is even smart enough to tell the difference between slices of wheat bread and white bread. All that information is communicated to SmartPlate’s companion smartphone app, making it easy to log your meals as you go.

Of course, there are plenty of competing gadgets that want to count your calories for you. SCiO, for example, analyzes substances by their molecular make-up and provides information about their nutritional value. TellSpec uses a laser spectrometer to identify your food. Meanwhile, smartphone apps like Lose It and MyFitnessPal attempt to use the gadgets you already have at hand.

What sets SmartPlate aside is its automatic nature. Because it weighs and identifies exactly what you put on your plate, matching that to food from a USDA database as well as its own database of prepackaged and fast food, it reduces the reliance on human error. It’s pretty hard to tell exactly how much that apple you’re having at lunch weighs, for example, unless you carry around a pocket scale. It also acts as just a plate, rather than a separate device that you have to use to scan each piece of food.

The SmartPlate is in a crowdfunding stage at the moment, and will eventually sell for $199 when it begins shipping in 2016.