The Truth About Table Tennis

Speed glue, robots and more. Learn why ping pong truly is the sport of champions 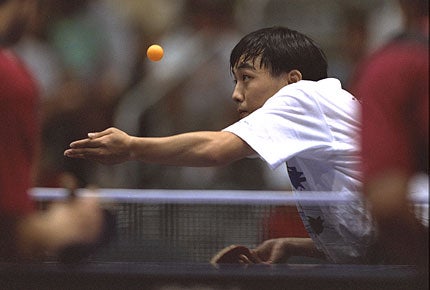 Every four years, we watch. We marvel at badminton, wonder about the modern decathlon and proudly pause for synchronized swimming. With more than 300 gold medals awarded across 37 disciplines, the next two weeks of our lives should be impressively unproductive. To aid in your immersion, we introduce the first installment of “know your Olympic sport.” It’s part reminder that people actually get medals for this stuff (see: trampoline gymnastics) and part introduction to the science behind the sports.

As a tribute to the recently lit flame in Beijing, our first installment focuses on the pride of China: Table Tennis (a.k.a. Ping Pong). Inside you’ll find a 30-year old performance enhancer in its final days, a training method built for Forrest Gump and all (perhaps even more than) you’ll ever need to know about Ping Pong balls.

A notorious performance enhancer used just hours before competition to get that extra zip on the ball. Sounds nasty. But, this glue isn’t sniffed, injected or swallowed; it’s the stuff that holds paddles together. Think, Elmer’s on ‘roids. For 30 years, any player worth his pong would sit down before his match and crack open a bottle. But, once the gold is awarded in Beijing, the Speed Glue Era in table tennis is officially over.

Legend has it that a Yugoslavian player in the 70’s came across speed glue by accident. He arrived for a tournament and forgot his traditional glue. Pro paddles consist of wooden blades followed by an inner sponge material which is attached to an outer rubber. Unlike the paddles in your garage, pro players glue the sponge/rubber to the paddle themselves. With a bike shop nearby, the pong player bought some adhesive normally used to plug a hole in a tire. By the time he got through P-I-N-G in his first match, it was clear that something had changed.

The mystery of speed glue comes down to its effect on the inner sponge material. When applied between the wood and the sponge, the glue expands and softens the sponge putting the outer rubber in tension. The result is a longer contact on the paddle, providing more spin and more speed (though less control). The effect only lasts a few hours forcing players to perform the ritual just before battle. So just how prevalent is this corking of ping pong paddles? 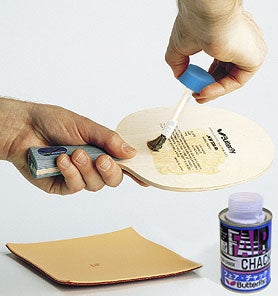 “They all do it,” said Marius Widmer, Media Coordinator for the International Table Tennis Federation.

At least for now. Ends up that speed glue truly is some nasty stuff. The glues contain known toxic substances referred to as Volatile Organic Compounds (VOC) that are rumored to cause everything from minor irritations to cancer (hexane, octane, ciclohexane, etc.). The prolonged exposure during the gluing process, over decades of playing, could be placing players at risk (a Japanese player had an allergic reaction last year). As a result the ITTF banned speed glue from junior competition earlier this year and will do the same at the pro level after Beijing. And, the ITTF is serious about enforcement.

“They’ll have a sort of doping control for the racket,” said Widmer. “There is a device that you put the racket in to measure whether there are compounds in the air.”

The detection box, Enez, has been used to detect volatile vapors in junior events since January. The battery powered box, developed in conjunction with the ITTF, provides results in 60 seconds and at 240 euros should be cheap enough for widespread usage. Rackets are tested before a match and players are required to use the same paddle throughout a match. If umpires suspect a juiced paddle based on the sound, they can require the paddle be retested. No players have been caught paddle doping to date but Widmer knows it’ll happen. Response from the industry has been mixed.

“The players want to continue with the glue because they know it works,” said Widmer. “The industry is not sleeping and they’re trying to develop alternative methods (different rubbers, sponges, glues). It’s really a science what they’re trying to do, but the level of play might sink a bit for a short time.”

So set your Tivo for the competition in Beijing. It’s not often one can witness the end of an era.

Forrest Gump, eat your heart out. While Gump famously practiced against himself, Olympic bound players today have a more imposing, less predictable, training partner: robots. The Paddle Palace 980-e can fire balls to 11 different locations at up to 111 mph at a frequency as high as 95 balls per minute. How’s that for practice makes perfect? The two wheel design allows spin and speed to be controlled separately. Players can design sequences of up to 50 shots and save the patterns for future sessions or let the machine fire at random. The robot can be yours for the bargain price of $1,399. But, hey, that includes free shipping, 10 free balls and a 30 day money back guarantee.

Clocked close to 70 mph, these little celluloid suckers can move. The seemingly simple ping pong ball is subject to quite a bit of poking and prodding before it’s sanctioned for tournament usage (more than 60 approved currently). The basic specs are that balls should be 40 mm in diameter and weigh 2.7 grams. The diameter was increased earlier this decade from 38 mm to 40 mm to slow the game down for audiences (complaints of neck spasms we assume). Only white and orange balls are allowed and construction must be completed with a single seam.

Prior to testing, balls are kept in a room at 23 degrees Celsius and 50 percent relative humidity for at least three days. Bounce is tested by mechanically releasing a ball from 305 mm onto a steel plate and measuring the rebound using a digital camera (240 mm – 260 mm acceptable, figure the COR out yourself). Balls are rolled down a 100 mm long incline at 14 degrees to quantify the ‘veer’. The hardness of the ball is measured using a Zwick tester that pushes a 20 mm pin into the ball. Why so meticulous? Well, as any college kid with a ping pong table and pile of red Solo cups can tell you: not all balls are created equal.

Special thanks to Judy Hoarfrost, one of the original Ping Pong Diplomats, for her suggestions.