How Pokémon Is Coming To Your Smartphone

Talking Pokémon Go with the CEO of Niantic, makers of the new augmented reality experience 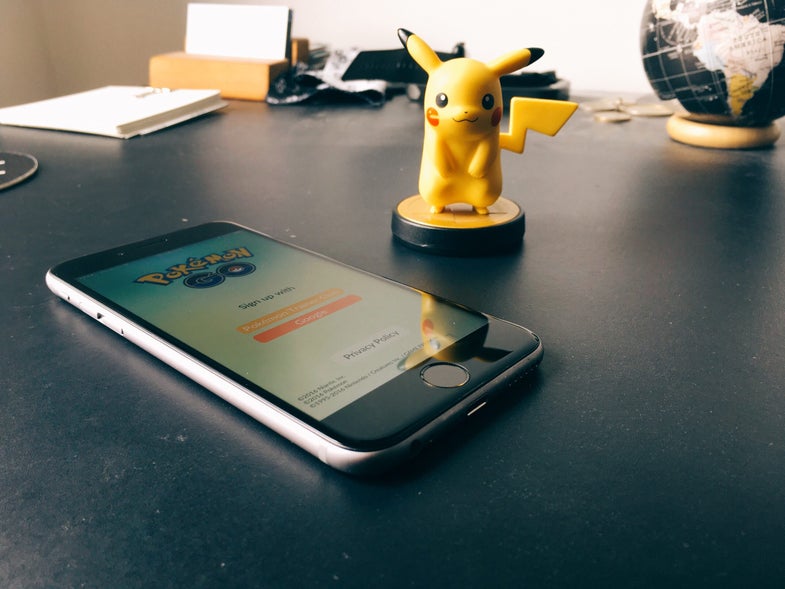 Official Pokémon games have traditionally lived on Nintendo-branded game systems. Maybe not the simple Pokémon encyclopedia apps or mini-games you can get for your phone, but the really good ones. Until nine months ago, that is, when the Pokémon Company announced that augmented reality company Niantic — makers of Ingress — would be bringing an official Pokémon game to iPhone and Android.

The mobile game, known as Pokémon Go, will let players walk around the real world and catch Pokémon on an app in their smartphone. As you move around, different Pokémon related to your habitat or nearby landmarks appear. Levels of hype for Pokémon Go spiked at furthers hints of group events, like the Times Square one seen in the game’s first trailer.

Niantic has some experience building these augmented reality-style games for mobile, and the developer group worked closely with Pokémon Company to make catching Pokémon in the actual world a reality. We spoke with Niantic’s CEO John Hanke about creating the highly coveted game.

Popular Science: Modern smartphones have been around for almost a decade and Pokémon is over two decades old. Why make a game like Pokémon Go now?

John Hanke: The idea for Pokémon Go came from this 2014 Google Maps prank—that was the first interaction between Niantic and the Pokémon Company. We had some practice building this kind of experience with Ingress — the augmented reality game that makes use of your real location — which has been out for three years. Pokémon Go is a combination of the two.

Smartphones have been around for a while, but the current state of cloud computing and location services make Pokémon Go doable. But neither Niantic nor the Pokémon Company wanted to just port the traditional console video game to mobile. The idea was to invent a brand-new kind of Pokémon game based on the real world and your location. A big challenge of the project was to bring those things together. Obviously we’ve had some practice with building Ingress. The goal was to combine lessons learned from that game while working with the Pokémon Company to preserve the core DNA of Pokémon.

In what ways has the DNA of Pokémon been preserved?

In a few ways. You can give your Pokémon nicknames, for example. There’s also battling and gyms. But a core part of the game is capturing Pokémon.

One thing we think is really cool is how you can keep track of where a Pokémon is initially captured, similar to the game, but the real world location. If a Pokémon was caught in Thailand, for example, it’s really special in that sense. It’s really tied to the area it came from — the location is part of a Pokémon identity. So you can already imagine people trading Pokémon of different types throughout different parts of the world. We’re also trying to be creative of where Pokémon appear and matching them to their habitats.

What about differences from the core Pokémon games?

The game is a little bit different in how you evolve the Pokémon. There’s the whole hatching process with eggs and incubators—allowing you to incubate Pokémon eggs while you’re walking around. And locations where players can obtain and harvest items are based off of actual historical sites. These aspects draw parallels to the video game but still offers its own complexities.

Also battling. After joining a team — red, blue, or yellow — you can train your Pokémon by deploying a Pokémon in a gym and leveling up. Other players can join the gym as well and make the team more powerful, while opponent players can challenge the gym while you leave your Pokémon there to defend it. They can potentially topple the gym and take it over.

Given the fact that the game’s taking place in the real world, it’s nice to structure battling in a slightly indirect way.

It seems like there’s an emphasis placed on time-shifted battling because Pokémon Go is on mobile. So head-to-head battling won’t be in the game?

That’s right. We felt given the fact that the game’s taking place in the real world, that it’s nice to structure the competition in a slightly indirect way.

What about other omissions that core Pokémon game players are interested in? You mentioned trading before, which is a huge aspect of catching ’em all.

What limitations did you run into while making the game? Was developing for Android easier than iPhone due to restrictions Apple places on apps?

Our goal was to make Pokémon Go equivalent on both platforms. We wanted a great experience for the widest number of people. When we got into supporting things like the Pokémon Go Plus add-on device that’s where you get into platform specific limitations. Android allows for things here that the iPhone doesn’t, but we tried to make functionality equivalent on both platforms. Doing that hasn’t been especially difficult.

Where did the idea for the Pokémon Go Plus wearable come from?

A big philosophy behind the game is exploring the real world, seeing cool stuff and just being outside. Sometimes it’s challenging to do that while buried in a smartphone application — you typically have your eyes on the screen. So we were really eager for ways to encourage heads-up gameplay, where at least some aspects of the game you can enjoy while jogging or taking a walk or riding a bike. Without needing to pause, get out your phone and interact with it. This led us to the idea of building an auxiliary device.

We had some experience building a companion app on Android Wear with Ingress. We looked at the Apple Watch too and really thought those kinds of devices are overkill for what we wanted to do. They’re several hundred dollars and not used by a ton of people. So rather than make something that would require you to buy a $300 watch, we chose to bring something to market that’s $35 that would provide basically all the same benefits you’d get with a version for the watch.

The Pokémon Go Plus isn’t meant to replace the phone interaction completely, but to supplement that with play sessions.

Will the Go Plus wearable function at all with the upcoming Pokémon Sun and Pokémon Moon games? What PoGo features will make their way back to the core games in Sun/Moon? What tie-ins can we expect?

On our end with Pokémon Go, all of that is under wraps and to some extent still under digression of development. We have nothing to share at the moment.

I can’t really speak to what features from Pokémon Go will appear in Sun/Moon. We’ve worked closely with Masada-san from the Pokémon Company — who previously worked at Game Freak — and know they’re very aware of what we’re doing with Pokémon Go. Whether specific elements of Pokémon Go will be a part of future versions of the game, I can’t say. But if it’s fun, it could happen. We’ll have to see.