Hurricane Joaquin Tracking Back Out To Sea

But dangerous flooding is still happening along the East Coast 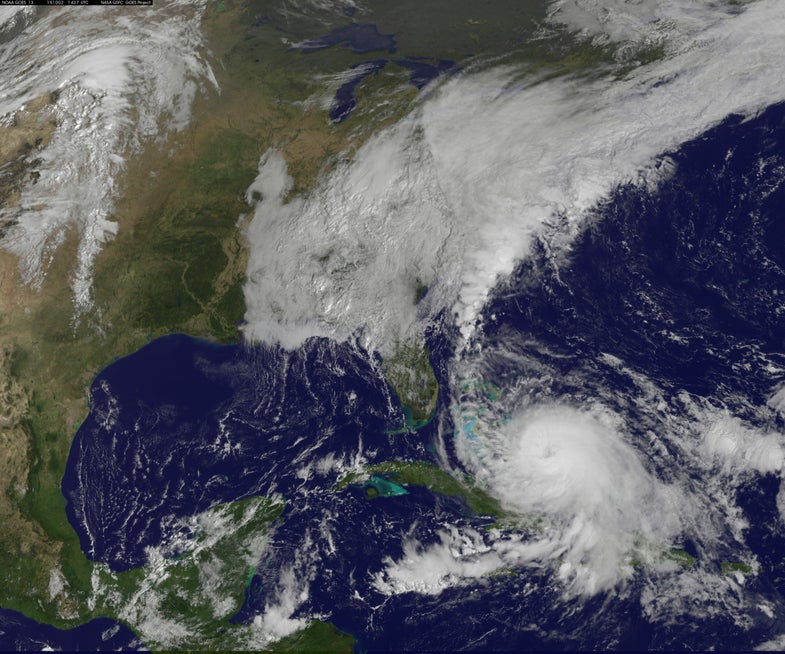 The latest satellite imagery of Hurricane Joaquin and associated tropical weather in the Atlantic was captured the morning of October 2, 2015, by the NASA network of three Geostationary Operational Environmental Satellites (GOES). NASA GOES
SHARE

For the past several days, people along the U.S. Eastern Seaboard have been nervously tracking the path of Hurricane Joaquin. But the latest data gathered by the network of sensors, satellites, and “Hurricane Hunter” planes and published online this morning by the U.S. National Hurricane Center indicate that the storm is likely to miss the populated coastal region by several hundred miles East, although it continues to batter the Bahamas.

Two people have reportedly already been killed in the Carolinas due to flooding and falling trees, according to Weather.com.

Other updated models all point to the hurricane sweeping past the coast as it weakens over the weekend:

Earlier forecast models varied widely, but initially appeared to show the Category 4 (out of 5) storm heading from somewhere between Washington, D.C., and New York City.

And given the storm’s then-growing strength and 130-mile-per-hour winds, government officials in the area were quick to begin preparations for Hurricane Joaquin’s possible landfall, with the governors of North Carolina, South Carolina, New Jersey, and Virginia preemptively declaring States of Emergency in their respective states.

The worst of the storm, however, is tracking to pass by the areas without making landfall, and the storm is likely to weaken in the coming days. As the National Hurricane Center notes in its latest update: “There is a high chance this system will develop into a tropical cyclone in the next 48 hours.” A tropical cyclone is less intense than a hurricane in terms of wind speeds, but is still dangerous for those out at sea and in its path.

Update: Friday, October 2, 1:13 p.m. EDT: A cargo ship with 33 people has gone missing in the storm near the Bahamas, reports Fox News, and the New York City government sent out the following weather advisory:

Update: Friday, October 2, 4:40 p.m. EDT: The cargo ship, the El Faro, had 28 Americans and 5 Poles among its crew, reports USA Today. The U.S. Coast Guard continues to search for it, but the search is proving difficult because the ship lost power and communications. At the time of last contact on Thursday, the ship reported losing propulsion and beginning to list and take on water, though the flooding is said to be contained, at least as of last communication.