Scientists reveal the first “wiring diagrams” of the cerebral cortex, shedding light on the infrastructure behind human intelligence. 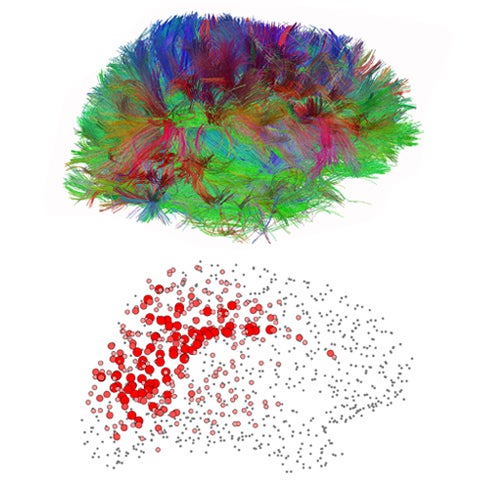 The famed molecular biologist Francis Crick turned to neuroscience in the 1970’s. But by 1993, he was so chagrined by the ignorance of his new field that he penned an editorial in the journal Nature. “It is intolerable that we do not have [a connection map of] the human brain,” he wrote. “Without it there is little hope of understanding how our brains work except in the crudest way.”

There was no such map in 1993 because the only way to get one was to use anatomical methods: inject dye into the brain of an organism, kill it, and trace the color trail in the neurons with microscopes. Of course ethics rule out this sort of experimentation on humans.

As a result, we know our primate relatives better than we know ourselves. Two recent studies, however, are finally laying bare the neural circuitry that Crick hoped to see—without a scalpel. The maps show that we have a central core of brain cell connections that seem to orchestrate our thoughts and behaviors.

The maps—one in high resolution from Swiss and American researchers, and one in lower resolution from a team of Canadians—were independently produced using a brain scanning technique called diffusion imaging. Unlike anatomical methods, diffusion imaging is easily done on living, breathing humans. Both teams targeted the cerebral cortex, the crumpled outer shell of our brain that seems to be responsible for our species’ unique mental capacity. Relative to body size, humans have the largest cerebral cortex among primates.

The key to its uniqueness, however, is likely not its size but how it is organized.

fMRI, the standard brain scanning technique that gauges brain activity, cannot show this organization. But diffusion imaging can, by revealing the major pathways of axons—the long fibers of nerve cells that transmit impulses to the next cells in line. It works by sensing how water molecules found naturally in brain tissue move along axons. Van Wedeen, a neuroscientist at Massachusetts General Hospital and Harvard University who pioneered the high-resolution version of diffusion imaging, explains that the principle is the same as an ink stain on your shirt: the fluid spreads along the fibers in one main direction. “This technique is like a magic wand you can wave over specimens, organs, or organisms,” he told me. “And there is the inner logic—digitally, in 3D, in color.”

Using the axon maps of multiple individuals, the scientists then located the brain regions that have the highest number of cell-to-cell connections. Each team found that these “hubs” are clustered centrally in the cerebral cortex. Think of the hubs like J.F.K. and O’Hare airports, whereas connections farther from the core are more like small-town airstrips.

Intriguingly, this core region has been found in metabolic studies to “run hot,” says Olaf Sporns of Indiana University, the co-lead of the Swiss/American study. “This part of the brain uses the most oxygen and glucose, especially when at rest—during quiet, episodic thought,” he says. “It is about 40 percent more active than the rest. Previously, nobody could make any sense of that.”

Neuroscientists aren’t saying that this hot spot is the seat of human intelligence—the macaque monkey seems to have a similar structural core. But until the differences are known in detail, we won’t have a shot at answering the question that only our species can ask: “What makes us human?”